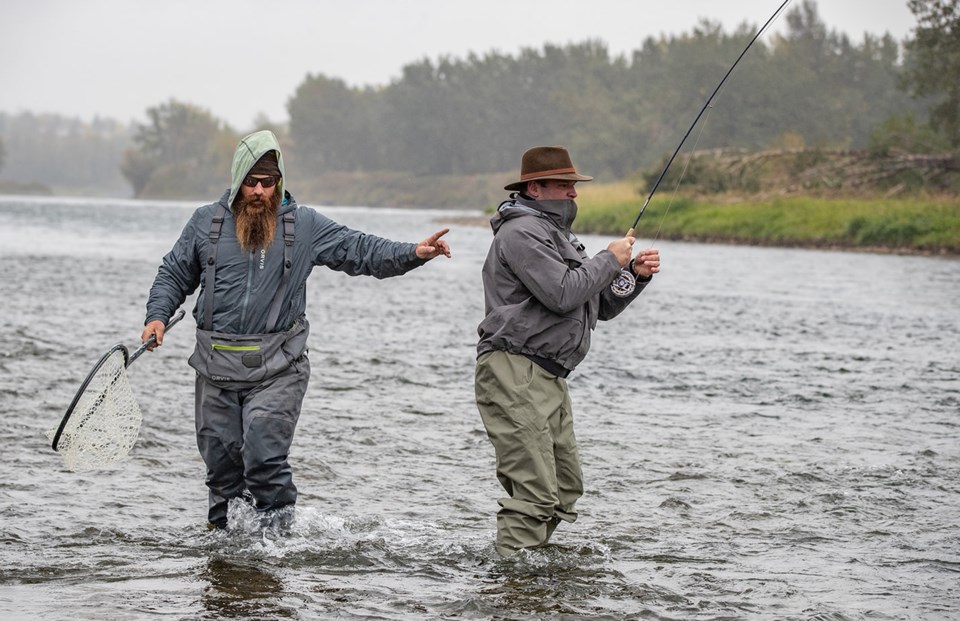 Dana Lattery helps out a client while fly fishing. His business is suffering with the U.S. - Canada border closure. Photo submitted

He and his partner Janine Deanna run a fly fishing business out of Calgary, called Fly Fishing Bow River Outfitters.

It’s been operating for about three years, but the COVID-19 pandemic has wiped out most of that business because most of their clients are Americans and the Canada/U.S. border remains closed to all but essential traffic.

“What’s screwing us is the border being closed,” Lattery said during an interview.

“We’re allowed to guide – two people on a boat outside is considered OK. But the problem is, with the border being closed, we lost probably 80 per cent of our business, because we take a lot of American clients.”

Fortunately, also due to the pandemic, a lot more Albertans are vacationing closer to home and many have booked fly fishing trips with the company, so that’s helping keep the business afloat (pun intended).

However, the loss of all that international business really hurts.

“Basically, the problem is we only have three or four months of work and 120 days when we can guide. That’s when you’ve got to make your money. So you’ve got to go all 120 days so that you can carry yourself into the off-season,” Lattery said.

“Now we’ve lost April, May, June, July because of the lockdown and it’s just really shrinking our season, which is already short, right?”

Lattery said for now, all he and Deanna can do is try to eke out a living as best they can until the pandemic dies down or people find a way to live with it.

The company has been employing about five guys to help out. Lattery said so far, he hasn’t needed to lay any of them off because they work shifts and fortunately for them, they also remain employed at other jobs they can rely on.

Luckily, he said, they don’t operate out of a bricks and mortar headquarters so they don’t have to pay bills for that.

An online fly tying course operated with help from friend Jim Crawford has been very popular too.

“We have a pretty good reach; we reach about 30,000 people a week so we’ve continued to do that service for free; just giving people something to do while they’re at home,” Lattery said.

Lattery got into fly fishing a bit as a teenager, but it wasn’t until he quit playing professional hockey in the early 2000s that he really took it up seriously. He began guiding in 2009.

Lattery says the transition out of hockey has gone pretty smoothly, because there’s a link via the instructing he does.

“We mentor and coach people who want to become guides, so I miss hockey, but I don’t miss coaching because that’s exactly what I’m doing right now,” he said.

“I don’t think you can take the coaching aspect out of somebody ever if it’s really in them and I get to do that now continually, just in a different aspect. It’s fun coaching and leading a group of people.”

Lattery said fly fishing is a way to lose stress, free his mind, and connect with nature.

“For me, fly fishing is the only thing that I’ve ever found that halts me and stops me and says, ‘you’re in this moment',” he said.

“I can’t explain it because it sounds weird that something so quiet and peaceful would not allow you to think of other things, but the whole world stops and you’re fly fishing.

“And if it all works out, they’re attached to the end of your fly line and you have a little dance with them and take a picture and let them go back in the water.”

Lattery repeated a comment he’s heard from some of his clients that he said rings especially true in this year of COVID.

“At the end of the day, people, my clients, say ‘today felt like the world was normal again.’

“And that’s what fly fishing has the ability to do.”

Successful Olds Terry Fox Run in COVID era
Sep 30, 2020 9:00 AM
Comments
We welcome your feedback and encourage you to share your thoughts. We ask that you be respectful of others and their points of view, refrain from personal attacks and stay on topic. To learn about our commenting policies and how we moderate, please read our Community Guidelines.