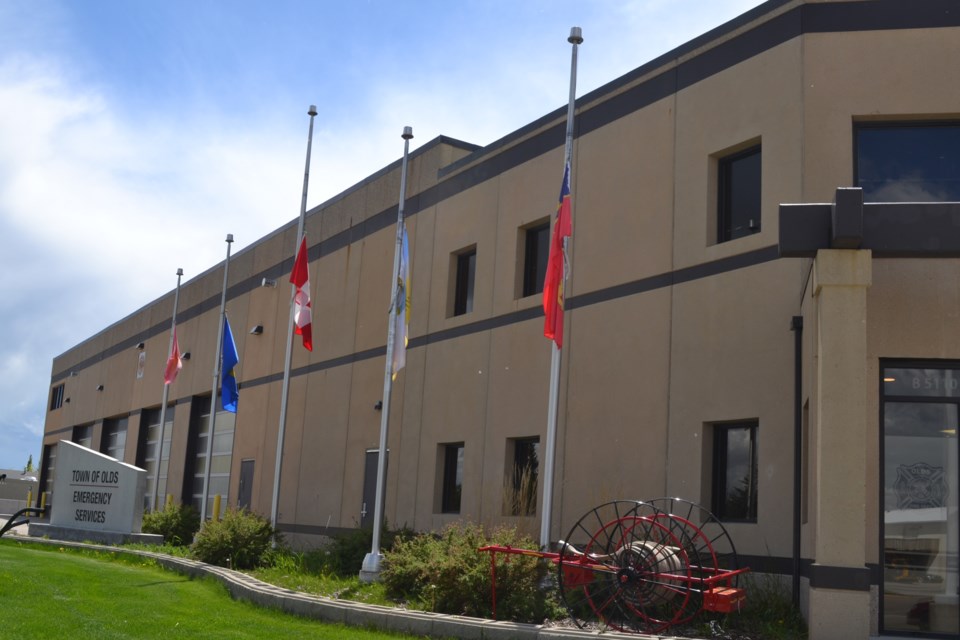 Flags stood at half mast last week for former Olds firefighter Cameron Potts who passed away June 4 after a lengthy battle with leukemia. Doug Collie/MVP Staff

OLDS — The Olds fire department is mourning the loss of a former firefighter.

Cameron Potts, 48, passed away June 4 after a lengthy battle with leukemia.

Potts served the department for about nine years, reaching the rank of captain before moving to the Prince Albert fire department, then eventually becoming a career firefighter in Medicine Hat for 16 years. There, he achieved the rank of lieutenant.

Flags at the Olds fire hall were lowered to half mast to convey the department’s sorrow and respect for Potts and his family as well as his sacrifices as a firefighter.

Fire chief Justin Andrew suspects Potts’ career as a firefighter may have been a factor in the cancer he acquired, noting he had “exposure to various toxins during that time.”

He has fond memories of Potts.

"Cam was a good friend of mine, and was a mentor for me early in my firefighting career. I had the good fortune to be his roommate for a couple of years prior to him leaving for Prince Albert," Andrew wrote in an email.

"We had many good times both at the fire hall and at home as in those days, our leisure time was spent with many of the members of the department in activities such as hose coupling competitions, and training opportunities at the Alberta Fire Training School in Vermillion, or any other opportunity we had to hone our craft.

"Even though he has been gone from Olds for many years he had a lasting impact on many of us."