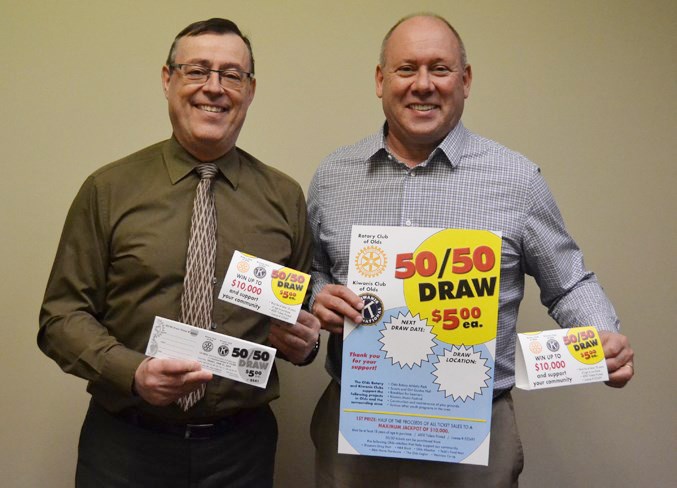 Dale Mackie, left, of the Kiwanis Club of Olds and Peter Premachuk of the Rotary Club of Olds display some of the promotional material from the first edition of the draw, held in 2019. File photo/MVP Staff

The final draw will be held at the Royal Canadian Legion Branch 105 at about 6:30 p.m. tonight during a break in the legion’s horse races.

As of last week, the draw was 90 per cent sold out. The final date to buy tickets was Sept. 23. They were only available at H&R Block and the Royal Canadian Legion in Olds.

The draw is a fundraiser for both clubs.

The winner will receive about $9,000 and the other $9,000 will be split evenly between the two service clubs for various projects and causes in the community.

Dale Mackie of the Kiwanis Club of Olds is an organizer of the draw.

“We are inviting people to come down to the legion earlier. They can stay late,” Mackie said, adding he’s looking forward to seeing the horse races as well.

This is the second straight year the two clubs have joined forces to hold the 50/50 draw.

Last year, the winner received just over $8,000, so this year’s pot is actually larger, despite the COVID-19 lockdown.

And Mackie notes COVID was indeed a factor in this year’s campaign.

Originally the final draw was supposed to be held on June 27, but Alberta Gaming Liquor & Cannabis gave organizers an extension to Sept. 25, due to the lockdown.

In light of all that, Mackie is pretty pleased that the draw is virtually sold out.

“We didn’t think we were going to get there so I’m pretty happy that we’re close to being sold out again with this, so it’s awesome,” he said.