Facility packed for Take Me Out To The Ball Game 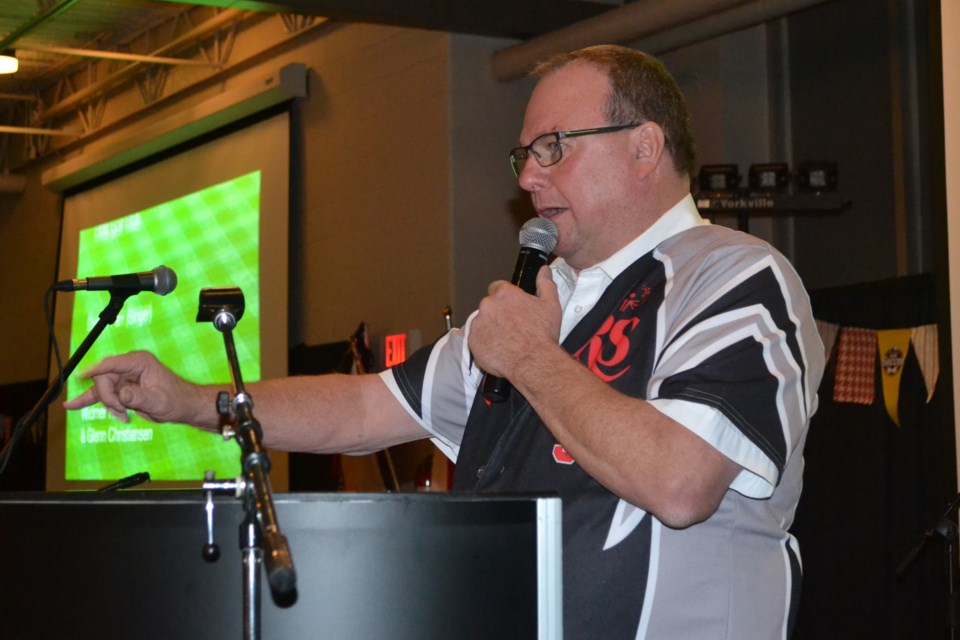 Rotary Club of Olds president Wayne Burgess addresses the crowd during the Take Me Out To The Ball Game fundraiser Oct. 26 at the Alumni Centre. Doug Collie/MVP Staff

OLDS - The Alumni Centre was packed Oct. 26 for Take Me Out To The Ball Game, the Rotary Club of Olds' fall fundraiser.

The purpose of the event was to raise money for the Rotary Athletic Park, constructed over the past couple of years along 70th Avenue, just north of Walmart.

In keeping with the name of the event, those attending the function were encouraged to wear their favourite sports jersey. Many did. Members of the Rotary Club were also decked out in jerseys. The room was adorned with various decorations in keeping with the theme as well.

Also in keeping with the theme, the crowd sang the national anthem.

Mitch Thomson stayed with the theme during his prayer to start the evening.

"The note said 'come and say a prayer.' So could everybody with a Calgary Flames jersey stand up," he asked, sparking some laughter.

"We recognize that for our athletes to have all of the opportunity and to succeed as they might, that they require the support of the coaches and the families. And we ask you to guide them so that they're taught good skills like sportsmanship; skills that they can use on the field and in their daily life," Thomson said.

"We hope, Lord, that you'll bless our coaches, you'll bless our athletes, and you'll bless all of the people in this room that are here to support the athleticism and sportsmanship that will come from this great athletic field soon in our community.

Club president Wayne Burgess pointed out the athletic park is just one of the things the Rotary Club does. He alluded to the fact that several local Rotarians were involved last month in a project to drive surplus emergency vehicles — including a surplus Olds truck — down to Mexico where they'll be further used.

He said the club is also involved in a project in Guyana.

Rotary is also continuing its efforts to eliminate polio throughout the world.

"We're going to give you some world-class ball diamonds to play on and we're thankful to you folks for helping us get that done," Burgess said.

Changes coming for health care
Feb 26, 2020 6:30 AM
Comments
We welcome your feedback and encourage you to share your thoughts on this story. We ask that you be respectful of others and their points of view, refrain from personal attacks and stay on topic. To learn about our commenting policies and how we moderate, please read our Community Guidelines.