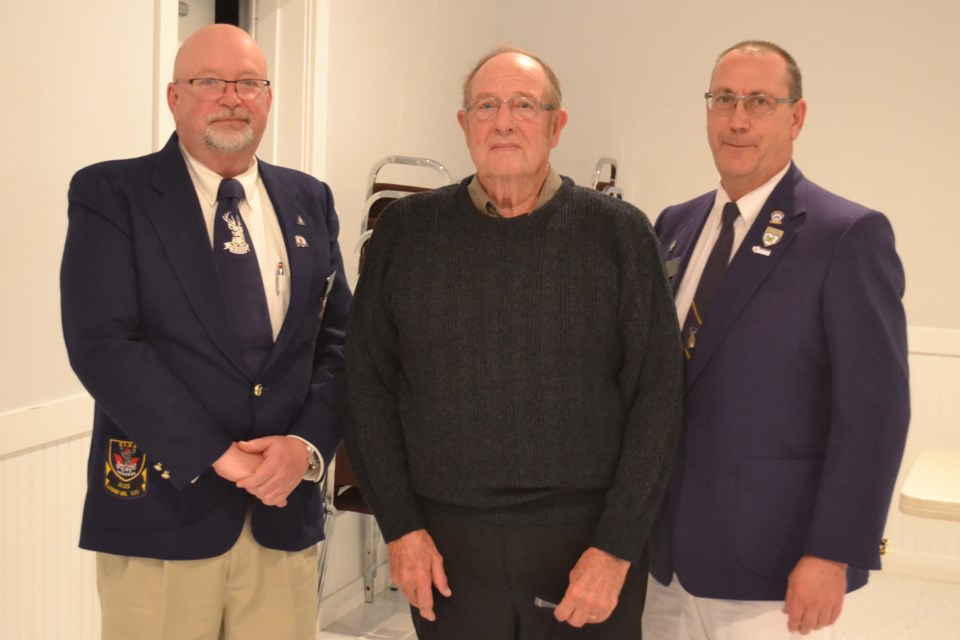 OLDS - About 40 people came out to the Elks Lodge on Oct. 19 to celebrate the club's 95th anniversary of existence.

During the evening about 10 pins for service were handed out.

One recipient, Ray Miller, received his for at least 60 years of service. In fact, the crowd was told the figure was more like 65.

A pin was also announced for Elmer Klatt, age 100, who unfortunately was among a few people who were unable to attend the event.

"At 55 years of Elkdom, that means you joined in 1964. And I know that, because the year I was born, you joined the Elks," he said, sparking laughter and applause. "You've been giving back as long as I've been breathing on this earth. Congratulations."

Shain, as well as provincial and district representatives, congratulated the local Elks on their anniversary. They cited the many things the Elks have contributed to the community, including creation of the Elks soccer field and other donations.

"In the past 20 years, you have donated nearly $7,000 to community projects. Thirteen thousand dollars helping families, $31,000 in local sponsorships, not to mention $29,000 helping to support Canadian charities to help those in need across Canada," Shain added.

"To accomplish all of this, the Olds Elks volunteered over 43,000 man-hours. These are outstanding numbers, and you deserve a round of applause."

Shain presented Exalted Ruler (local club leader) Steen Pedersen with a certificate for 95 years of existence as an Elks club. He also announced a donation to the Elks Royal Purple fund for children for $95 on behalf of the Elks of Canada in the name of the Olds Elks Club.

"Ninety-five years is nothing to be taken lightly," provincial representative Kelly Sanford said. "It is doubtful schools, hospitals, sporting events could go on without you."

Sanford also thanked the club for its participation in the Tabs for Tots drive. Under that program, pull tabs from pop cans are collected and sold to scrap metal dealers with proceeds going toward health-care equipment. Sanford noted she has a son requiring medical care.

"The fact that you guys go to the school and collect 500 pounds of tabs to buy medical equipment — it's maybe not much cash to you, but to me, it's medical equipment that is able to keep my son (in) local (medical care). To me, it's a lifeline for my son. Thank you Olds for all you do," she said.

"1924 till now. Hard to believe. But when you look around and see the members all sitting here, you appreciate what the Elks have done in the community over the years," she said.

Hannah and her assistant deputy presented the club with a cake for the occasion.

"Congratulations to all the Olds Elks members and all those receiving service pins. It's very, very well deserved," she said.

Mayor Mike Muzychka told the crowd he recently attended a function in Red Deer during which he was asked "what makes Olds so great?"

"That answer was simple and easy."  I said, "It's the people of Olds that make this community great. The volunteers in our town — you people, sitting in this room," Muzychka said. "Thank you very much on behalf of the entire town, the staff and my council. Congratulations on 95 years."

Steen thanked all the speakers on behalf of the club.

"It's very touching," he said. "I know for myself — and especially for others who have been with the lodge for a long time and done this kind of work — we really appreciate the acknowledgement and recognition."

Another highlight of the evening occurred when Dr. Wray performed magic for the crowd.