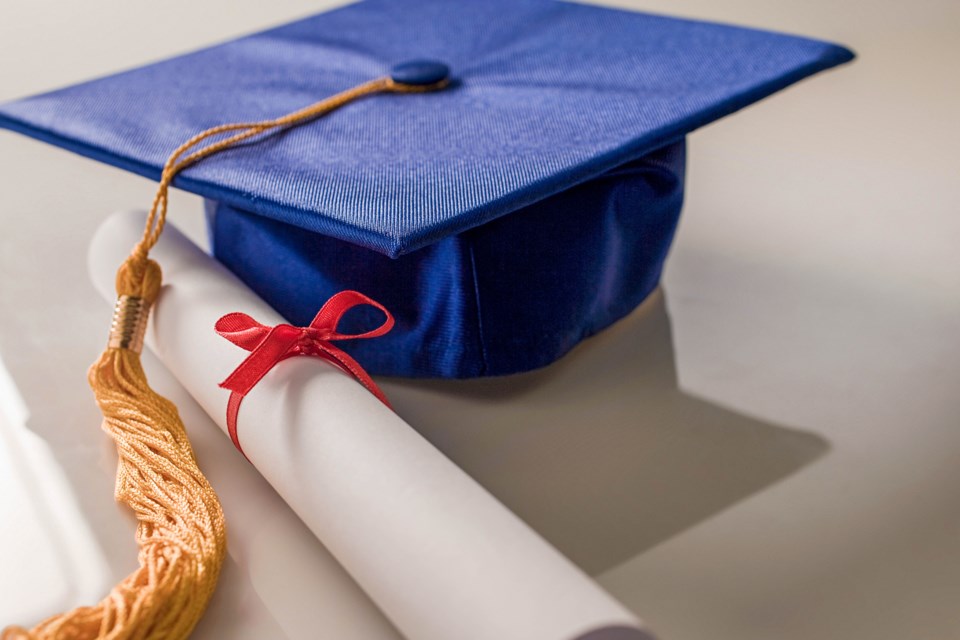 Celebrations take place Thursday and Friday night, although Friday, Aug. 21 is the big occasion, when graduation ceremonies will be held, starting at 5 p.m. at the Ralph Klein Centre gym.

Parents and guardians will have to watch elsewhere on campus.

As was reported in the Albertan earlier, the ceremony was postponed and had to be tweaked in a lot of ways this year, due to COVID-19 pandemic lockdown and protocols.

Events actually begin Thursday night, Aug. 20, at 5 p.m. when the grads are invited to attend a barbecue.

During that event, they’ll be encouraged to spray paint their names along the road just south of the high school.

However, they will not be allowed to spray any “silly weird code of some kind” or any such thing, nor are they allowed to spray paint in sidewalks, according to rules laid down by organizers.

That night grads will also receive a cap and gown and a sign for their front lawn that can be featured in photos they take with their family the next day.

That cap and gown will not be needed for the grad ceremony on Friday.

The grad ceremony begins at 5 p.m. but students are asked to be at the school no later than 4:15 p.m. so that grad photos can be taken at the soccer field on the east side of the school.

Masks will be provided for all grads. Parents are asked to wear a mask if they have one and if physical distancing can’t be maintained.

Once they’re seated and the program begins, masks can be taken off if physical distancing can be maintained.

The entire program will be streamed live. A link will be provided a few days before grad.

This year, two photos will be taken – one with a mask and one without.

All the grads are asked to dress in formal attire, just like they would have for any other year.

“Look your best, you have deserved it,” an itinerary for the event says.

The grad begins at 5 p.m. and is expected to last about three hours. A break will be provided in the middle.

In order to meet Alberta Health guidelines, plans call for half the grad class to be allowed in the gym for each half of the program.

Parents will be able to watch the ceremony live streamed.

Each half of the grad class will be able to watch the ceremony unfold in the commons while the other half is in the gym.

“It’s almost like the NHL bubble in a way, because the game will be happening, but people are going to be watching it mostly on TV. But it will look a lot like our Friday night,” principal Tom Christensen said during an interview.

After the grad ceremonies are over, a parade will be held through town with vehicles decorated by grads and/or their families. It will serve as this year’s version of the annual grand march by grads.

Plans call for the parade to go west down 54th Street to 57th Avenue, head north to 52nd Street and east to the Sportsplex.

Parents and guardians have been told the emphasis for this parade is fun. Grads and/or their families are encouraged to decorate their cars, trucks – or even golf carts – for the occasion.

The goal is to make this a memorable occasion for the grads so members of the public – be they family members, friends or town residents in general – are encouraged to come out along the parade route to support and salute the grads.

“We’re hoping the community watches and watches the grads with their parade,” he said. “They did well and they should recognized.

"They went to school the same as every other graduation class and achieved the same things, so they need to be honored for that.”

Christensen agreed the whole celebration is a lot different than in previous years due to COVID but added, “I think people have become accustomed to weirdness,” and the goal is to still create “a very memorable, special occasion for the grads.”