Items sold briskly during the fall and winter but have slowed lately as the seasons have changed
Jun 13, 2021 4:00 PM By: Doug Collie 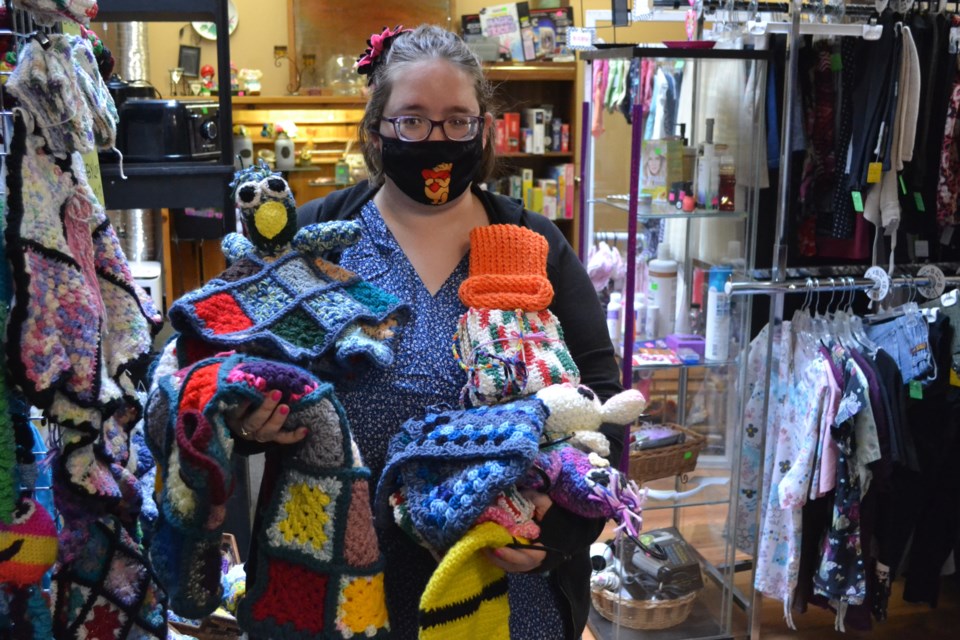 Ashley Coffin with some of the items she created. Doug Collie/MVP Staff

OLDS — A partnership between a local store and a woman who loves to crochet has taken off for both of them.

In crocheting, items are created by looping yarn with hooked needles.

While looking around, they asked if Grammies would be willing to sell crocheted items – Ashley's all-consuming hobby. They were impressed with the fact that the store supports Horizon School, a special needs school in the community.

Store owners Abbie and James Cummings said they would.

Both parties have been amazed with how well those items have sold. They estimate she’s earned about $500 so far.

Abbie Cummings says 100 per cent of the profits go to Ashley.

Ashley began crocheting in Grade 5 after learning the craft from her step-grandma.

“I’ve been carrying on since then,” Ashley said during an interview. “I watch TV doing it and I take it on holidays. I always have a hook and a yarn and I always have a project on the go. It relaxes me.”

In fact, Ashley figures she crochets from the time she gets up until she goes to bed.

“I do hats, I do ponchos, I do blankets, scrunchies, dish cloths, octopus toys," she said.

Ashley explained the so-called ponchos are more like jackets. She also crochets afghans.

Ashley said she brings in a bag full of new crocheted items every week.

She’s surprised – and pleased -- how well her products have sold.

“It’s been selling here like cupcakes,” she said. “When I got my first paycheque (in October), it was like ‘wow, OK, it’s selling.’”

Abbie Cummings said she and James are happy to work with Ashley and they’re impressed with her work ethic.

“We don’t take any money, we don’t charge her for her space. We don’t charge GST on it. She gets 100 per cent (of the proceeds),” she said. “We donate the space for her and she does it herself."

Sales have slowed a bit lately as the seasons have changed, but Abbie thinks they’ll pick up again soon.

"I’m kind of sad it’s slowing down now, but I know it’s a seasonal thing. But we’re happy to support her and we’re glad that she’s doing well,” she said.