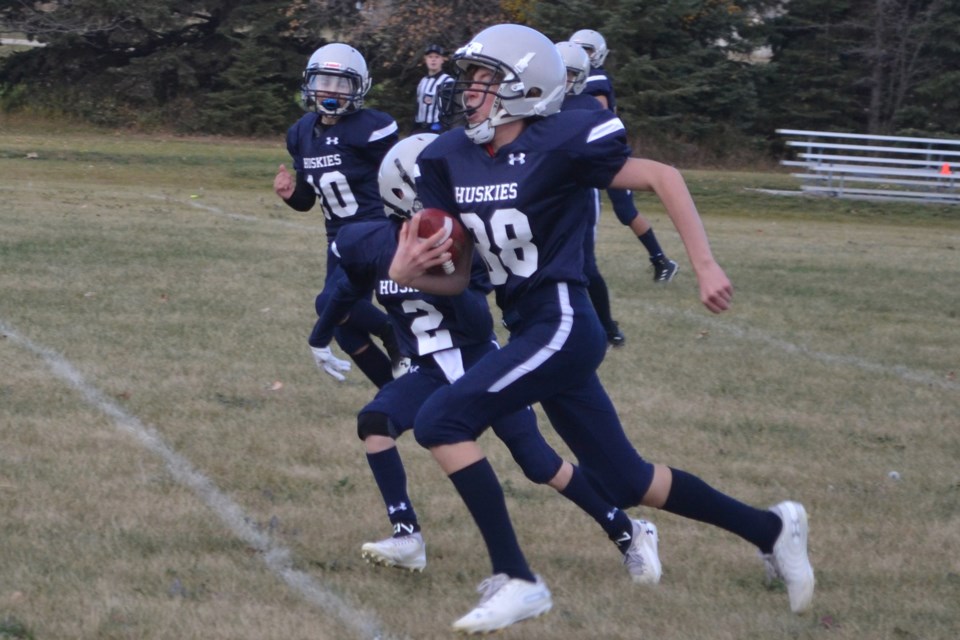 Riley Watkins runs in for a Huskie touchdown, protected by a phalax of teammates during a peewee football game between the Olds Huskies and the Innisfail Cyclones Oct. 10 at Normie Kwong Park. Doug Collie/MVP Staff

As of mid-October, they had compiled a 4-0 record during a head-to-head series with the Innisfail Cyclones, whose record fell to 0-4.

Prior to that, the Huskies had been winless since their championship appearance in 2017.

The Cyclones and Huskies teams tangled one last time Oct. 17 in Red Deer.

The Huskies play their last game of the season Nov. 6 in Lacombe versus the Explosion.

Despite their strong record, the Huskies will not get a chance to go to the playoffs.

“Due to COVID, we’re not actually playing in a league so there’s going to be no championship or anything like that,” Huskies head coach Dennis Yurchevich said during an interview.

He noted that this season served as just a development season to allow the Huskies and the Cyclones to get a season in and learn a lot for next year.

On Oct. 10, the Huskies put on a clinic, downing the Cyclones 48-0 at Normie Kwong Field in Olds.

The Huskies served up a fairly balanced passing and running attack.

“From my understanding, Innisfail’s starting quarterback actually went down with an injury off the field and they were running with a second-string quarterback. And yeah, unfortunately, their passing game was affected,” he said.

The Huskies have come a long way since the season began in September, Yurchevich said.

The first couple of games were just jamboree-style games where the two teams played a series of plays each, then traded offence for defence and vice versa.

During the last couple of games they stepped it up a notch, adding a kicking game and special teams.

“We’ve really been working on developing our kicking game this year and our place kicker was six for six on extra points this year,” Yurchevich said.

“The team itself is coming along very far and very well from where it’s been the last couple of seasons.

“We had a successful season last year. We didn’t – unfortunately, just like Innisfail is doing this year, it didn’t show on the scoreboard, but development-wise, our players improved greatly last year over previous years.

“And thankfully this year, even though the wins don’t count for anything and there’s no championship, the players have been able to develop and work their way into actually getting some wins.”

Next season, the rebuilding begins all over again because the Huskies will be graduating 10 players – more than half their team – to the Bantam level.