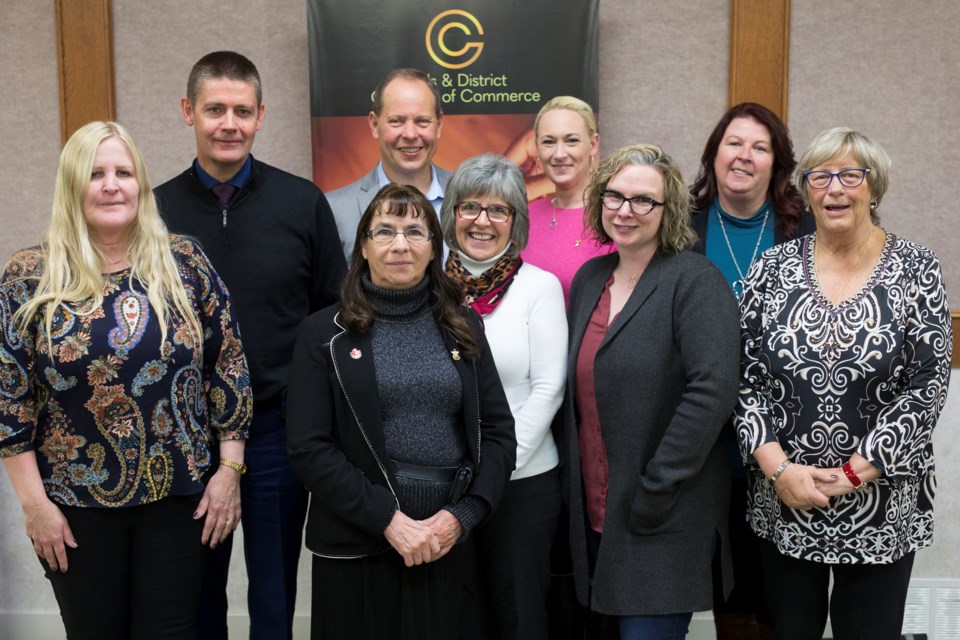 Judy Schlichenmayer, front row, second from left, was an active member of the Olds & District Chamber of Commerce virtually from its inception. File photo/MVP Staff

OLDS — A huge hole has been created in the community with the loss of Judy Schlichenmayer, who passed away Sept. 21.

In addition to being the owner-operator of Torrock Towing, Schlichenmayer was deeply involved in many local boards, committees and associations, including Olds Rural Crime Watch (ORCW), the Olds & District Chamber of Commerce (ODCC), the Olds & District Community Policing Society, the Kiwanis Club of Olds, Citizens on Patrol, and Victim Services, to name a few.

In virtually each case, she was not just a member but got heavily involved, usually sitting on the board of directors.

She said she’ll miss “the fire that she had, the humour, her optimism.”

“Whatever was thrown in her way, she always just shone a bright light on it and absolutely took the most out of every moment of living.”

Bodmer said Schlichenmayer was involved in the chamber for decades and held “multiple positions” on its board over the years. In addition, she served as Bodmer’s “defacto admin bookkeeper assistant.

“She’d sometimes hold three positions in one year because of the ebbs and flows on our board,” Bodmer said.

In fact, Bodmer said the news was so shocking that the chamber cancelled a board meeting originally scheduled to be held Sept. 23.

“I think everybody is just in such shock. It’s pretty hard to focus on anything,” she said.

He worked closely with her decades ago when Schlichenmayer oversaw the books at Olds College and he served as its director of campus facilities.

They became ever closer when they learned they were actually cousins.

Schlichenmayer had a stroke when still very young and suffered a terrible tragedy when her husband Will and youngest son Ty were killed in a vehicle accident. Somehow she carried on, raising her other son Darcy.

Over the years, Milaney, his son and crew helped Schlichenmayer in various ways: building fences and a deck as well as renovating her house to accommodate a disability that arose as a result of the stroke.

Milaney said Schlichenmayer persuaded him to get heavily involved in the community as well, joining the Kiwanis Club and Victim Services, for example.

He was always amazed at how active she was, given the limitations that arose from the stroke.

“Years ago I said ‘except for my grandma, you’re the toughest girl I’ve ever known’ – like mentally tough,” Milaney said.

“To lose her husband and her baby and then carry on when she’s already had a stroke, that’s absolutely stunning when you think about it.”

“We were friends. We were always friends,” he added. “And she was a very gentle person, but very determined. When she made up her mind to do something, she’d just do it, right? And she brought people along with her.

Kiwanis Club of Olds president Murray Elliott said Schlichenmayer was a key member of that club too.

“As president, she was my right-hand person,” Elliott said, adding Schlichenmayer was “very instrumental” in planning the club’s community auction as well as its district meeting.

“She leaves a big hole in the community. I don’t know who’s going to do all the work she’s done,” Elliott said. “Just a great, community-spirited businesswoman who was a tireless, dedicated volunteer.”

Mayor Michael Muzychka was also surprised and saddened by the passing of Schlichenmayer.

“Judy was such a great advocate and volunteer in town,” he said. “It was absolutely shocking and the town is saddened by her passing, of course.

“There was no better advocate for the safety of our town. With the Rural Crime Watch and COP here in town, among other things, she had done fantastic work.

“She was very prevalent in the chamber of commerce and what-have-you. So that’s a big loss for the Town of Olds.”

“We hosted the provincial conference twice that I know of and she was the main organizer for that; the person that did everything, basically,” he said.

“(She’s) irreplaceable. This throws everything into a terrible shambles,” he said.

“She is basically a walking history book of the last 25 years of Crime Watch. That’s a terrible loss. That’s like burning down the local library.”