Most trailers in mobile home park appear to violate Town of Olds land use bylaw, development officer says
Jun 4, 2021 6:00 AM By: Doug Collie 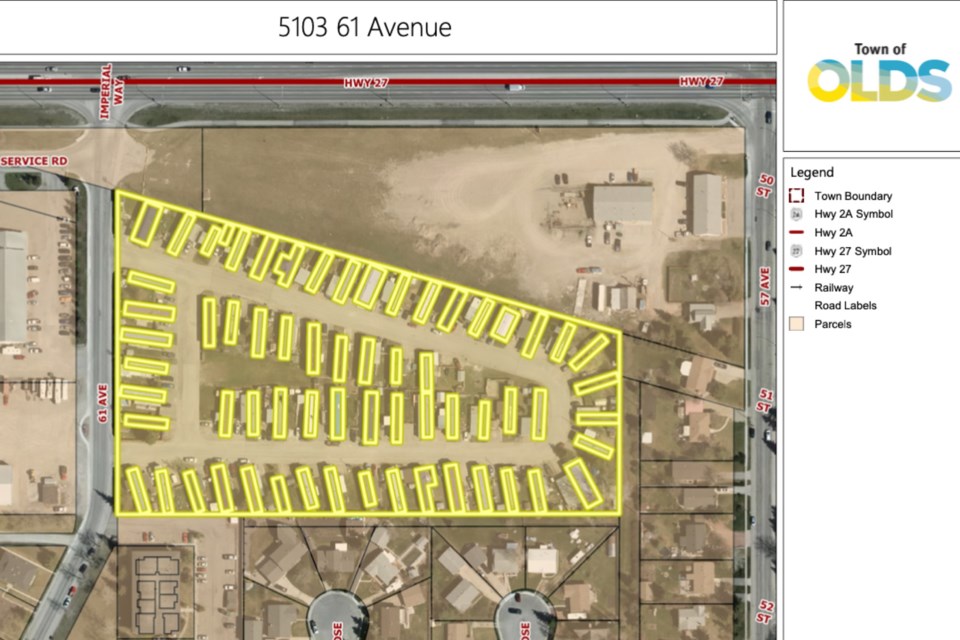 According to this satellite photo of the property, 43 units out of about 64 in an Olds mobile home park appear to violate the town’s land use bylaw, development officer Kyle Sloan said. Screenshot

OLDS — An application to move a unit into a mobile home park has highlighted a problem – it's difficult to ensure that those homes conform to the town’s land use bylaw.

Development officer Kyle Sloan raised that issue when the Municipal Planning Commission (MPC) met via Zoom on May 20.

The Town had received – and initially approved -- a development permit application for a mobile home to be moved into a mobile home park at 5013 - 61st  Ave.

Unfortunately, after the home was moved in, it was determined that the home was so large that it would need special approval from the MPC.

After a lengthy discussion, the MPC approved the application.

Sloan said it’s difficult to determine exactly how much room mobile homes should be required to provide “because there’s no formal property line in the park.”

He said one measurement indicates the mobile home in question “goes essentially to the fence.”

But that unit isn’t the only one that appears to violate provisions of the bylaw. He said 43 units out of about 64 in that park appear to violate it, according to a satellite photo of the property.

"Every single unit that is on the outside of the route of the internal access road, every single one failed to meet that eight-metre requirement,” Sloan said. “There are several as well that are essentially right up to the fence at this point.”

In addition, Sloan said the bylaw requires homes there to be located at least three metres from the edge of the park’s internal access road.

“Again, there are several that don’t meet that requirement in this park,” he said.

Sloan was not sure if any of those homes went as far out toward the road as the one in question, which he said “is slightly over the gutter at the side of the road.”

However, he also pointed out that a bylaw officer did go out to see the placement of the home firsthand and was not concerned about it, saying there was still lots of access for vehicles.

Coun. Mary Anne Overwater asked if there are any restrictions on how long mobile homes can be.

“I mean, it looks like they’re all wrong, they’re all going to have to do a compliance thing if anything is ever done with any of them,” Overwater said. “This just frustrates me when all of this happens – when this many things are not in compliance.”

“How would you even make this trailer compliant? You couldn’t.”

Sloan said he was unaware of any restrictions on the length of mobile homes, adding restrictions that are in place are based more on distance from other homes and from other areas.

"Another thing is that those change when units go out and move in and are different sizes. Then those invisible property lines shift as well,” Sloan said. “It is very complicated.”

He said the park contains about 64 units but he only knows of development permits for perhaps half a dozen.

“This is one where we actually did receive an application instead of just having somebody move in,” he said.

At the same time, though, Sloan wondered if the eight-metre setback requirement for rear yards is too much in these cases.

"We would be really concerned if the fire trucks couldn’t get in there because of the length of this mobile home,” Harper said.

Town staff have talked about sending out a notice to mobile home park managers to remind them about pertinent provisions of the land use bylaw and that applications for new units are needed, said Sloan.