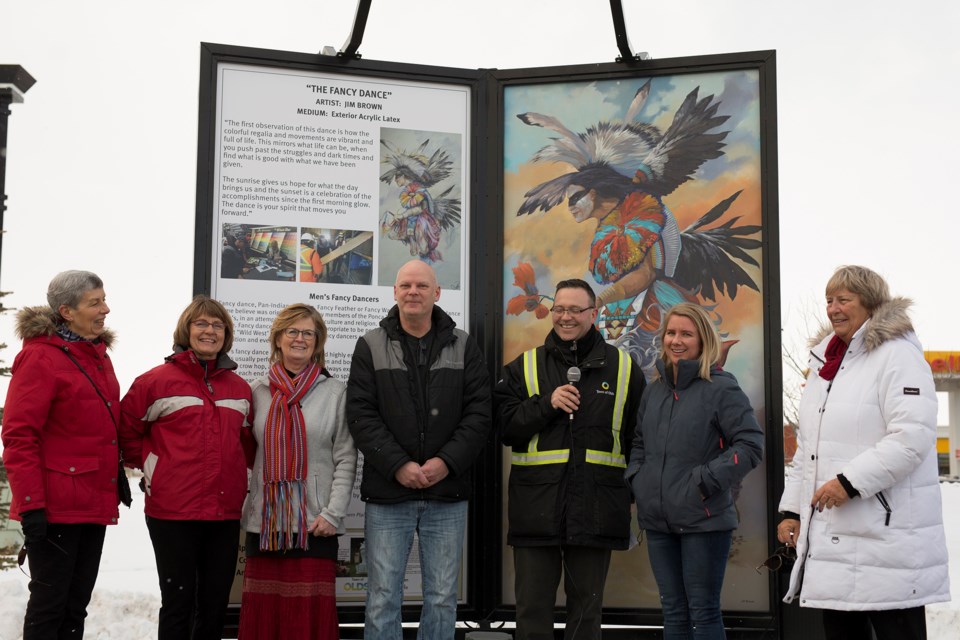 Community services director Doug Wagstaff, third from right, poses for a photo with artists, left to right, Yvonne Kennedy, Veronica Reist, Gayle Kohut, Jim Brown, Laura Neaves and Mary Jane Harper, who is also an Olds town councillor, during the Feb. 14, 2020 unveiling ceremony at the Cornerstone Arts Commons in Olds. In the summer of 2019, the Town of Olds commissioned local artists to create murals for temporary display at the Cornerstone Art Commons. File photo/MVP Staff

OLDS — Should all public art owned by the town be displayed only in municipally-owned buildings, or should some be displayed elsewhere?

Councillors wrestled with that question during the Feb. 22 council meeting. It’s expected to come up when council re-examines its public art policy over the next couple of months.

One opportunity could arise during a public hearing on a bylaw regarding the public art policy which includes how murals will be dealt with. That’s set for March 22 at 1 p.m. via Zoom.

A second opportunity will likely come in April, because council has tabled a final decision on its art policy until then.

“How do we decide where that art goes? You know, if we own it, shouldn’t we display it in our own municipal buildings,” she asked.

Community Services Director Doug Wagstaff said the town doesn’t have a specific policy on the matter.

He pointed out that the artwork cited by Overwater was originally set up in the Cornerstone Arts Commons, which is located near the Shell service station in the west end of town.

“We had recognized that that was not going to be the permanent place for them because they could wear in the elements, but could go there for a short period of time,” he said.

A replica was made and placed in the Arts Commons. Town officials considered various sites for a more permanent location for the original, including the municipal library.

Wagstaff said in the end, it was decided the best place to display it was in an area of Olds College utilized by the Moccasin House Friendship Centre Society because “they are pieces of art that are about Indigenous culture here in Olds, that that was the appropriate place for them to align with.

Overwater said nonetheless, in her opinion, council should decide where artwork owned by the town is displayed “as we do have a lot of municipal buildings versus hanging it elsewhere in other buildings that are not ours.”

Several councillors agreed with her position.

Chief Administrative Officer Michael Merritt also agreed with Overwater in general, but said the town should first obtain an inventory of what artwork the municipality owns, then determine where it should be displayed.

"There’s probably two inventories: one on the artwork and one on the actual public buildings that we would have access to,” he said.

“I think that’s a fairly simple fix," he said. “It’s just adding a clause that all public art be brought back to council for its placement within the town.”