Auction set up for family hit by house fire 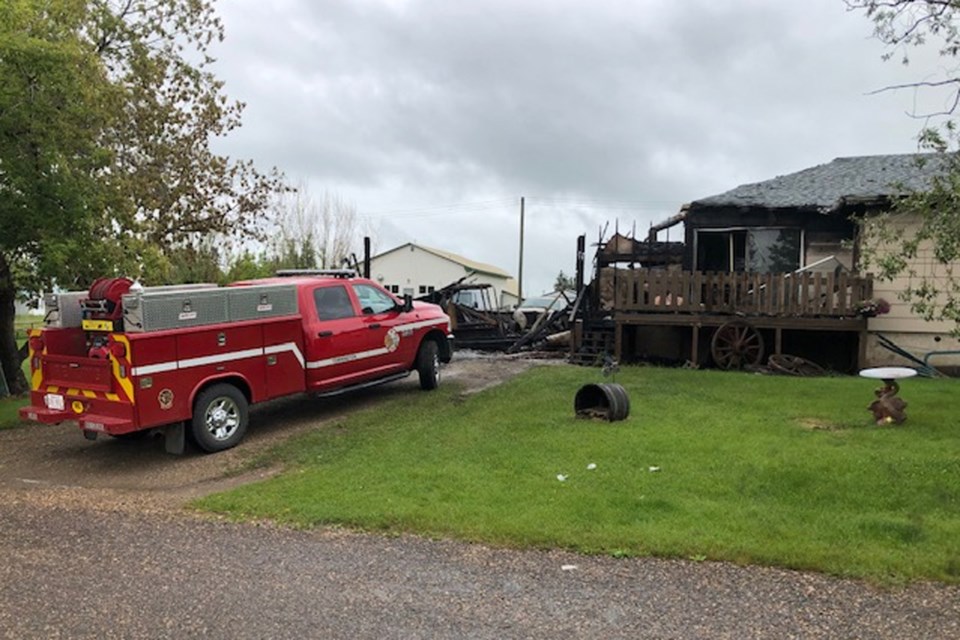 Fire officials inspect a home and garage in Torrington burnt by fire on June 30. Submitted photo

TORRINGTON — A fundraising auction for a couple who lost their home in a house fire is taking shape.

It will be held July 19 at the Torrington Community Hall. Tentative plans call for it to start at about 12:30 p.m.

The home in Torrington belonging to Tom and Marg Adamson was hit by fire on June 30.

The couple, who have lived in the community for more than 20 years, lost their home and belongings in the blaze.

Kneehill County officials say the blaze broke out at about 3:40 a.m. that day.

Tom and Marg and their brother-in-law Van who were in the home all got out safely and received medical attention.

They're staying in a variety of places. According to Kevin Damon, their son-in-law, Tom is staying in their fifth wheel on the property to look after two cats who escaped from the home and were found wandering in the area. Marg is staying at her daughter's home in Trochu and Van is staying in various places.

Kneehill County fire inspectors undertook a fire investigation in the days following the fire. In an email, a county official says the cause has been determined to be "accidental, not suspicious."

Residents of the area were urged to avoid the scene so inspectors could do their work safely.

Ken McDonnell, president of the Torrington Community Hall board, said as soon as they learned of the fire, members of the community were anxious to help.

A small committee was formed to organize the auction and obtain donations in order to raise money for the family.

“They pretty much lost everything,” McDonnell said in an interview. “The house is right beside the Gopher Hole Museum.”

Tom is a really helpful guy, they said.

“He’s basically your local handyman,” Johnson, the hall board’s vice-president, said. “You need somebody (like that) in town and usually in a town like Torrington it turns out to be an older gentleman. That’s the way.”

McDonnell said Tom cuts the grass and does other odd jobs around town.

Johnson said one day, a huge snowfall occurred shortly before he was scheduled to hold a big auction and Tom arrived to help out.

“Who’s there just shovelling snow there in the morning like you wouldn’t believe to get the walks all done up and everything for the crowd that would come to the auction,” he said.

Johnson said the fact that the province is now allowing crowds of up to 200 people will make the auction that much more feasible.

“When push comes to shove, the fastest way to help out a family like that is to get out there and do it,” he said.

He and his wife, Leanne, have been keeping in touch. In fact, he saw them all the evening of July 2.

He said Tom was released that day from the hospital for smoke inhalation. He said Van has second and third degree burns on at least one of his feet and that Marg is also basically alright. Damon said she appears to have inhalded some soot but "nothing got down into her lungs, thankfully."

He said all three have varying reactions to the fire.

"Van’s the one who went in and saw the fire so he’s still upset," Damon said. "He’s starting to go through that survivor guilt thing, like ‘why did I survive this, I had so much flame and this and that. (He’s) surprised he survived.

"Tom is – he’s taking it in stride. He’s very emotional because it’s 60 years of all his life, all his stuff. He’s the type of person that if you needed something, you show up at his door. Everybody knew him. If you needed help, Tom would be there first.

"Marg’s upset because she lost all her mom’s and aunts’ all their heirlooms and stuff like that. They’re all pretty much gone."

Damon's understanding is the Adamsons plan to rebuild in Torrington.

"As far as I know, yes," he said. "They’re just going through (it with) the adjuster right now. He just showed up today (July 3). That’s what I’m hearing; they plan to rebuild here."

Damon said the family has been close with his family.

"They were just a stone’s throw away from the house. My kids used to run over there every day," he said.

"I’m right on the other side of the road from them."