Local eight-year-old Brianna Kilpatrick recently attended the Canadian Model and Talent Agency Convention (CMTC) and her family says that according to some agents and talent scouts, she might have the potential to make a career in the entertainment i
Jul 9, 2019 10:10 AM By: Mountain View Today Staff 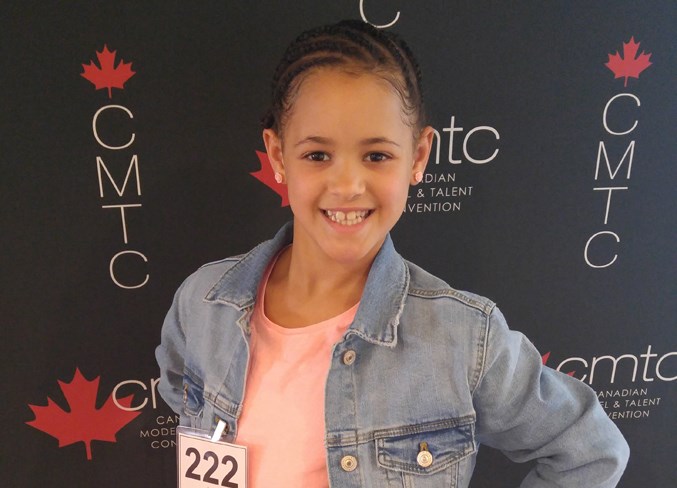 Brianna Kilpatrick recently attended the Canadian Model and Talent Agency Convention (CMTC) and her family says that according to some agents and talent scouts, she might have the potential to make a career in the entertainment industry.

Local eight-year-old Brianna Kilpatrick recently attended the Canadian Model and Talent Agency Convention (CMTC) and her family says that according to some agents and talent scouts, she might have the potential to make a career in the entertainment industry.

CMTC is an “invite only” convention held in Toronto each year where aspiring models and actors pay to have the opportunity to show off their worth to potential management firms and agencies.

Kilpatrick auditioned in November of last year at an open audition in Calgary and immediately received interest from one of the casting people and she got the invite to the event, held this spring.

“When I was in Toronto it was cool because I got to do a lot of cool stuff at CMTC and it was a great experience for me,” said Kilpatrick.

Some of her activities included runway modelling and acting for television commercials.

“On the runway, I just got to walk down. It was cool, I got to wear my favourite outfit and it was just fun,” Kilpatrick recalled, describing her outfit as a dress with ruffles and flowers.

After her time at CMTC ended her family said she received 10 callbacks from interested agents, reps and talent scouts from Toronto, New York and Los Angeles.

In a media release from Kilpatrick’s mother, Jana Brown, she said agents told her that her daughter “had an impressive level of confidence and she received praise for her poise, talent, and beauty."

“It’s the first time I’ve ever been there and having 10 callbacks is really special for me,” Kilpatrick said.

“It was a bit overwhelming, I’ve got to say when we had that many. I was hopeful we’d get something,” Brown said. “Anything would have been nice but when we have so many you kind of have to sift through and make choices.”

Brown explained that the interactions with these interested parties happened throughout the four-day CMTC event through one-on-one interaction as well as hearing them in seminars.

As a mother, Brown is proud and shares her daughter’s excitement despite how at times it can be overwhelming.

“It was really just overwhelming that so many people saw what I’ve been seeing for years,” said Brown. “I mean for them to recognize it in her under the circumstances where there are so many other people to look at and she still managed to stand out and shine, I was overwhelmed, very proud.”

Kilpatrick hopes to find success in the areas of acting or modelling and noted that she would be happy with anything.

“Acting and modelling would be like finding a treasure full of gold. That’s what it’s like for me,” she said enthusiastically.