A piece of Bowden history on display

A trip to the Bowden Museum will net you a look back in time at a unique collection of early century photos that have now been transferred to the Alberta Archives for preservation.
Aug 22, 2017 1:00 AM By: Mountain View Today Staff 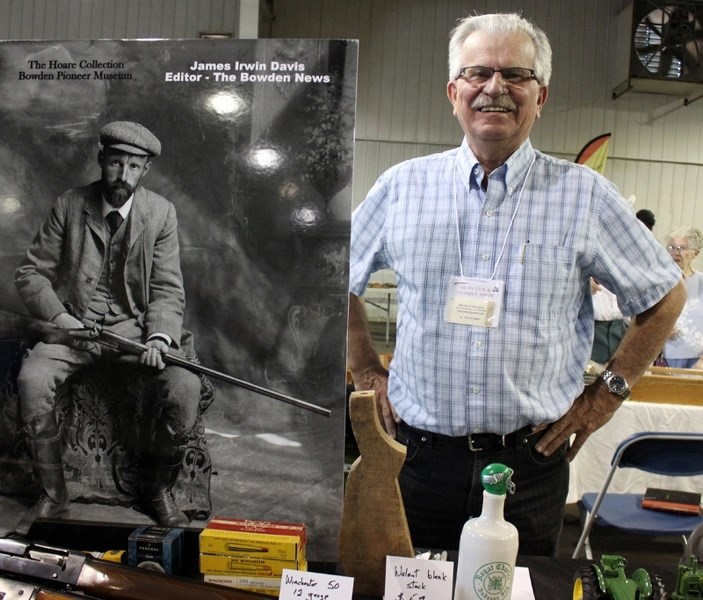 Richard Johnston is the curator of the Hoare Collection at the Bowden Museum. Bob Hoare was a photographer in the eary 1900s in Bowden, and lived on the Johnston family’s land toward the end of his life. His collection of 823 portraits is now being preserved by the the Alberta Archives, and digital copies are on display at the museum.

A trip to the Bowden Museum will net you a look back in time at a unique collection of early century photos that have now been transferred to the Alberta Archives for preservation.

Gerald Robin O'Brien Hoare, or just ëBob' to the people who knew him, was an English immigrant and local photographer, who arrived in Bowden in 1904, after having taken a boat across the ocean and a train across the country.

"He was remittance man," said Richard Johnston, who curates the collection of of Hoare's photos now on display. "He came from a very aristocratic family in England, and they basically paid money to get him to another country, and they sent him a cheque every once in a while."

He had no wife or children, and took up residence next door to Johnston's family when he was a child.

"He opened up a studio, and the pictures start then," said Johnston, of the collection that features portraits of locals in the BowdenñInnisfail area from the first half of the 1900s.

As he grew older, and his health failed, Hoare moved onto their property, and did gardening work for Johnston's father, while continuing to take photos.

"He was basically a photographer-gardener," said Johnston. "He wasn't a wealthy man; he never owned a car. He traveled throughout the area on a bicycle."

Along with the collection of photos, one of Hoare's old Massey-Harris bicycles is also on display, along with a replica of the studio he worked in, and some of his cameras ñ in fact, Hoare's artifacts were the first exhibit for the museum.

After Hoare died in 1964 in Edmonton, Johnston's mother became the executor of his estate, and his negatives were left to the family. In those days, they took the form of glass plates, three by four inches, collected by the dozen in small boxes. There are 823 plates in all ñ some 70 boxes.

The negatives were permanently loaned to the Alberta Archives earlier on, but as technology advanced, Johnston wanted them back in order to create digital files.

For seven years, Johnston negotiated with the archivists to give him the negatives for scanning, but they were reluctant to let the valuable piece of history out of their hands. Instead, an alternative was offered up: they would do the scanning and provide the digital files to Johnston, in exchange for permanently donating the collection to the Archives.

Johnston wasn't sure about the deal, and talked it over with the museum board.

"Do you want to have these images to be displayed to the public to try and maybe identify some of the people in them," they asked him, "or would you rather have a pile of little boxes on a shelf out back?

The consensus was, said Johnston, that they wanted people to be able to see the photos, and they agreed to transfer the collection in exchange for the scans.

The photos are now on display at the museum, a projected stream that takes about an hour and 15 minutes to watch, as each image flashes up for three seconds.

Every photo is numbered, leaving people the opportunity to go back and request to study images more carefully, or even order prints. The hope is that people will help identify the subjects in each photo.

Still to come are photos from Johnston's own collection, some 400 more examples of Hoare's work he has yet to scan, including an image taken on the deck of the boat that brought him to Canada.

Johnston also has what he believes to be the last photo that Bob Hoare ever took: a black and white family photo including his parents, sister, two brothers and himself, in front of his dad's new 1959 Chevy.

"I can remember it like yesterday," laughs Johnston. "He said he wasn't going to be taking pictures any more, because film had gone up over a dollar a roll."

It's a nice personal memory among the hundreds of photos of strangers.

"It was an interesting story and I was fortunate to spend time with him," said Johnston, who later went on to have his own photo studio.

"This all came, I think from an interest in photography because I spent time with this old gentleman when I was a kid."

MORE: Some of the photos can be viewed on the Alberta Archives Flick site at https://www.flickr.com/photos/alberta_archives/albums/72157663448967584. The full collection of 823 photos is viewable at the Bowden Museum.

"Bowden has a Hoare House."RICHARD JOHNSTONCURATOR OF PHOTOS BY BOB HOARE