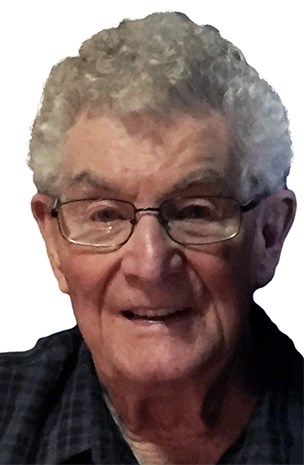 It is with sadness and love that we say farewell to (Waldemar) Allan Sveinson, beloved husband, father, brother, grandfather and great grandfather, who passed away December 10, 2020 (a few hours short of his 94th birthday).

He was born during a snowstorm at the family farm near Markerville on December 11, 1926 to Waldie and Violet Sveinson and, as ‘big brother’ to Keith (Edna) and Ken (Marie) kept close family ties throughout his time with us.

He rode horseback to school in Markerville where he met his childhood love, Norma (Moyer). They later attended school in Red Deer and when they married in 1948, they joined Norma’s parents, Herschel and Gladys Moyer, to establish their own farm, Melody Meadows, near Innisfail. He believed in the best in people, loved to laugh, and would always take time for a cup of coffee with friends and neighbours. At harvest time, the lights from the combines in the fields late at night showed his dedication to the land and to neighbours as they helped each other get the crops off. His father-in-law’s motto was ‘to leave things better than he found them’ and Allan planted windbreaks and followed best farming practices to protect the soil.

As a father, brother, friend and mentor, he led through generosity, by example and always with an insight and integrity that gave one pause. Being the father of three daughters did not stop Allan from encouraging and involving them in farming activities: learning to drive tractors and trucks, attending auctions, going to purchase fertilizer, hauling grain to town, shopping at the UFA, repairing machinery, building fences, attending calving, feeding cattle and pigs.

He bought his eldest daughter a car as soon as she could drive so that she could help ferry herself and sisters to activities, but he never seemed to get around to fixing the muffler so that he always knew when she came home.

Except for the teenage years of his daughters, he was the last to climb the stairs to bed at night. As decades passed and daughters visited into their fifties and sixties his last words as he passed their bedrooms continued to be “Night, night to the little precious”

Hired men became family and Allan helped them develop skills for their future successes. He was active in establishing the Innisfail Seed Cleaning Plant, in the building of the United Church, and in the United Farmers of Alberta, the Innisfail Lions and the Innisfail Flying Club. He loved to fly.

As a husband to Norma for more than 72 years he knew that his life was enhanced by their combined strengths and efforts, not only as farming partners. They were passionate about music and answered many requests for duets. He always hummed or sang while he drove, and also while he worked, or anytime really because that was a part of who he was. They loved dancing and he called square dancing. His daughters learned to dance in the living room with furniture pushed aside and he taught his granddaughter ballroom dance steps by letting her stand on his feet. Those passions and arranging ‘Canada’ parties were continued during the 30 plus years that he and Norma spent winters in Arizona.

He extended his love, warmth, good humor and allegiance for things ‘John Deere’ to his six grandchildren and seven greatgrandchildren by letting them drive the garden tractors or mow the lawn (when their feet could touch the pedals), providing smaller tractors for the littler ones and adding ornaments to the house including a clock that produces a different tractor sound every hour on the hour.

Allan was predeceased by their infant daughter, Ladene and their adult daughter, Leone. Just as he passed away, his daughter received the good news that she would become a grandmother. Remembering him and grateful that we are better people for having known him are his beloved Norma, daughters Lynn (Gerry), Laurie (Larry), brothers, grandchildren (Drew, Bailey, Cole, Cal, Alexes, Anna), and greatgrandchildren (Domonik, Bella, Sylas, Declan, Haddie, Wynter, Poppy). Night, night most precious.