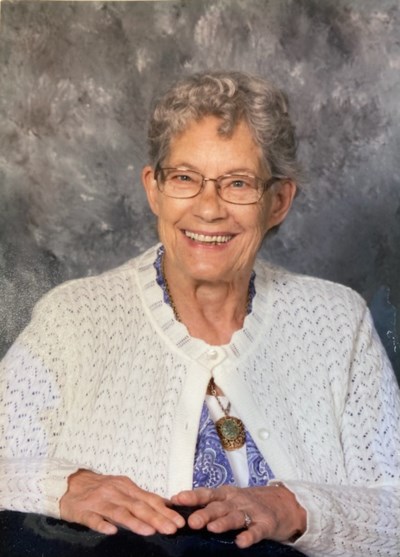 Mrs. Florence Mildred ‘Flo’ Quesseth (nee Tams) passed away peacefully on Saturday, May 22, 2021 at the age of 93 years.

Florence was born on May 29, 1927 at Innisfail, Alberta, the first of five children born to Frank and Alys Tams. She grew up in the Aberdeen District, just east of Innisfail, attending the Aberdeen School, then Innisfail High School. After completing High School, Florence moved to Calgary, Alberta, taking a Comptometer course. Upon completion, she began working as a Comptometer at Union Milk. She eventually met the son of the people that she was boarding with, Ray Quesseth and the two were married on May 26, 1951.

Their family was complete with the birth of their son, Greg and their daughter, Twyla. They returned to the Aberdeen area where they set down their roots; Ray farming and Flo as a homemaker, mother, gardener and hostess, to their family and neighbors. Florence also volunteered in many organizations, and in October 1983, she was awarded the ‘Innisfail Good Neighbor of the Month’. Florence was an enthusiastic photographer; starting the Innisfail Photo Club with Ray and their friends, Perry and Emily Abraham. Through their Regional Competitions she won several awards. Wherever Flo went, her camera was her constant companion; she was always looking for that ‘perfect shot’. Ray was an avid horseback rider and although not a regular rider herself, Flo would join him on many trail rides in the West Country. Later, when he took up racing Pony Chariots, Flo was there, always his biggest fan. In 1980, they began travelling abroad and took several cruises as a couple and with their special friends, Carl and Elsie Matthie.

Flo also became a pillar of support for Twyla after her husband, Cecil passed away. For three years she would pack up her suitcase to spend a month or two taking care of Twyla’s son, Bryn and keeping the household running, as Twyla did seeding and harvest. After Ray passed away in 2006, Florence remained on the farm for eight years, before moving to Innisfail. Flo has always been noted for her profound sense of family and community.

She will be greatly missed by many. Florence will be lovingly remembered by her two children, Greg (Maxine) Quesseth of Innisfail and Twyla (Calvin Hancock) Quickstad of Clandonald; her three grandchildren and her seven great grandchildren. She will also be deeply missed by her sister, Donna Cook of Rocky Mountain House and her sister-in-law, Marianna Tams of Innisfail.

Florence was predeceased by her husband, Ray Quesseth, a son-in-law, Cecil Quickstad, her siblings, Bill and Mel Tams and Marilyn Peden; as well as her parents, Frank and Alys Tams, a brother-in-law, Ralph Cook and a sister-in-law, Shirley Tams.

A Private Family Celebration of Life was held on Monday, May 31, 2021 at 2:00 p.m. For those who were unable to attend, please go to www.heartlandfuneralservices.com and click on Florence’s Memorial Page, the Live Streamed Service will appear under ‘Photos & Videos’. If desired, Memorial Donations in Flo’s honor may be made to a Charity of the Donor’s choice. Condolences may be sent or viewed at www.heartlandfuneralservices.com. Arrangements in care of:  Heartland Funeral Services Ltd.  4415 – 49 Street, Innisfail, Alberta.  Phone: 403.227.0006   Fax: 403.227.6437