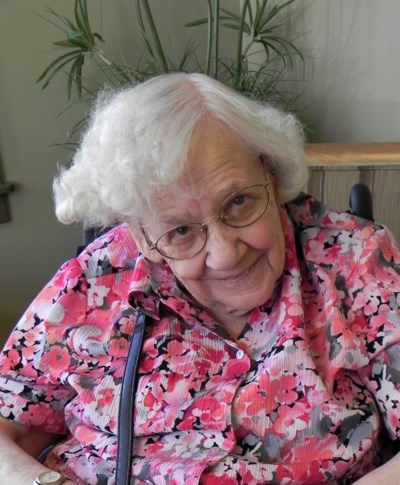 Mrs. Dorothy Ann Pryzner passed away peacefully on Wednesday, March 24, 2021 at the age of 84 years.

She was born on August 25, 1936, to Jacob and Evelyn Banman, near Aylsham, Saskatchewan.  The family moved numerous times throughout the years because of her father's job in the Oil Industry.

When she was nine years old, she was predeceased by her mother and seventh brother, James.  Dorothy and most of her siblings were then placed in Woods Christian Home, an orphanage in Calgary, Alberta.  She finished High School while living with her sister and brother-in-law.  A few years later, she married Stanley Pryzner, a farmer from east of Calgary.  They worked hard, and raised four children; reflecting the values of a strong work ethic, commitment, integrity and faith.  Life was not easy in those early years, but they continued to trust God in it all. She enjoyed being with her children and visiting with friends.  She spent many hours reading books and doing crossword puzzles.  Dorothy sewed many clothes for herself, and the family, in their early years.  Her family enjoyed her homemade bread, white cakes and other homemade items.

Through the years, she also recuperated from a car accident, had three hip replacements, besides other injuries. Dorothy loved to be with people.  When her husband passed away, she spent her remaining years in Sunset Manor, Innisfail.  Through all the challenges she faced, Dorothy kept her faith and hope in God, trusting Him to bring her through.  Everyone who knew her knew she looked forward to her heavenly home, where she is now rejoicing.

Dorothy will be lovingly remembered by her four children, Wendy, Gary, Linda and Gordon and their families; as well as numerous other relatives.

Dorothy was predeceased by her husband, Stanley; her parents; her two brothers, David and William; a sister, Edythe; her mother-in-law, Eva; her father-in-law, Jan; a sister-in-law, Ann; a brother-in-law, Walter; a son-in-law, Dave; a daughter-in-law, Dawn and a granddaughter, Danae.