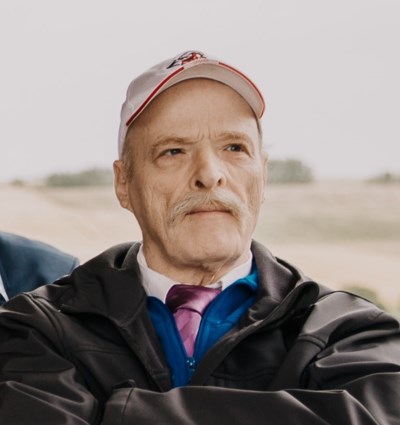 Neil, or “Corny” as he was known to many, passed away on Friday, May 1 after a prolonged battle with prostate cancer.

If the ultimate goal is to arrive at the pearly gates with no fuel left in the tank, then Neil’s life was a life well lived.  Neil lived on his own terms, often neglecting future outcomes in favor of savoring the moment. A great athlete, amongst other activities Neil played senior AAA football for the famed Red Deer Packers and performed admirably in goal as the self proclaimed “Ken Dryden”, for the historic St. Agnes Saints, a church-sponsored team from his home parish in Carstairs.

While not blessed with the typical gargantuan Overwater stature, he was instead blessed with an indomitable mental will. Neil was happiest when he was with his literally countless nieces and nephews, giving them experiences that no parent in their right mind ever would. If a child couldn’t put a smile on his face, then the next best thing was a wrench in his hand. Neil relished the challenge of keeping his numerous Junkers on the road, oftentimes despite the transportation acts protests.

Taking things apart was never an issue for Neil but putting all the parts back together sometimes was. He was famous for figuring out what parts of his car/truck were redundant and didn’t need to go back on, and often wondered why Chevrolet never called him as a consultant.   Other then a wrench another thing that made Neil very content was a garden tool in his hands, having grown up in a market gardening family for most of his young life.  He often cared for the flower beds at his places of residence and was complimented continuously on the gigantic sunflowers he grew while in Bethany Care Center.

Neil also took great pleasure in helping others.  While he often liked to ‘poke the bear’ with family members, he was extremely proud to carry the family name.  If you called Neil for help, he always did his best to answer. That’s what matters most, and that’s something we will all be proud to remember.  For these things among others, he will truly be missed.

Neil was pre-deceased by his father John Overwater Sr., mom Antoinetta Overwater, brothers Eric, Paul, and John, sisters Anne and Antoinette.  He is survived by his sisters Fran, Pat, Theresa and Mary, and brothers Joe, George, Tony, Pete, and Chris.

: At this time we would like to say thank you to all the wonderful people who aided Neil in the past 16 months and throughout his life. A special thank you to all the staff at Bethany Care Center whose devotion to the care of their residents never wavered through these demanding times. Thank you