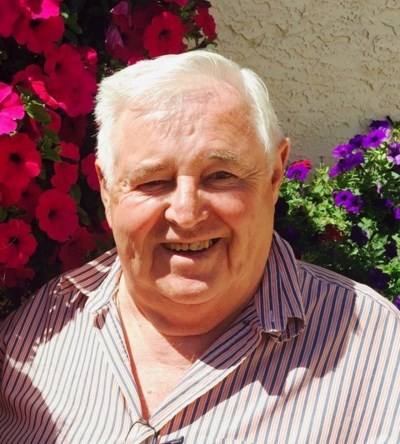 It is with great Sadness that we share the news of Tom’s passing on November 10.  Although he had cancer and was in hospice he was not in pain and knew it was his time.

Tom was born in his beloved Jasper Dec 29, 1942.  As a boy “WeeTammy” loved adventure and never shied a way from a chance to be outside with his pal’s.  The youngest of 4 kids with a single Mom, they never had much and Tom worked wherever and whenever he could.  But there was always time for socializing and fun with friends and Tom took advantage of every chance he could to tell his jokes and stories and make people laugh.

With A yearning for bigger adventures and new material for his stories he headed to Edmonton to try his hand at big city life.  There he found the love of his life Dawn, and they soon were headed to the Coast as Tom loved the summers he had spent there and wanted to share that with his new bride.

After many years, and many new great friends were made, the mountains called him home.  He and Dawn returned to Jasper to raise their boys.  Tom soon found himself working as the Power Guy.  It was hard dangerous work keeping everyone’s lights on but he was proud to do it.  Some may say he spent as much time visiting around town as fixing the lines; but he felt he was the face of the company and it was his job to make sure that everyone he came in contact with got some of his light.

Tom semi-retired to work at Jasper Park Lodge where, if you were lucky, he let you come and play at “his” golf course.   He never missed a chance to heckle his friends as they approached the first Tee.  His time at the lodge was some of his favorite. He cherished the friends and “family” he met there.  As always, he found ways to be in the spotlight and showcase the Jasper he loved and share it with strangers and friends a like.  His long history of touring anyone that would join him around Jasper, made him a natural guide.   There was no better way to enjoy the Lodge in the winter than on the back of Tom’s sleigh hearing his stories.

Tom never missed a chance to be social and around people and he was active in the Masonic Lodge, Jasper Volunteer Fire Depart and so many other groups and functions.  He loved to take the stage, share a story, a poem or joke and bring joy to those around him.

As full retirement loomed and the arrival of his most precious Granddaughter Taya came,  Dawn and Tom made the decision to leave Jasper and start a new home in Innisfail.  To be closer to family.  Tom was never content with  just the friends he had he always wanted more and made sure to grow the ranks of friends everywhere he went.  Building so many great relationships in his new town.

Tom’s life will be celebrated by his Amazing wife Dawn, sons Kirby and Casey.  His Daughter in Law Lisa and his most precious grand-daughter Taya, his Brother Bob and Sister Margaret as well as his late sister Colleen and all their families. And of course his countless friends all over the world.

It is ironic that the man who spoke for so many dear friends as they passed and who loved an audience more than most will not get his da.   But those are the times we live in and he wanted everyone to be safe.  So pour yourselves a glass, put on some Irish music and help us send him on his way.

If you wish to honor Tom’s memory the family asks that you make a donation to the Red Deer Hospice Society as they are a godsend for people in their last days and rely on donations to provide such an amazing service.

As Always, Tom wanted to have the final story and asked us to share his thoughts.

“let this be my epitaph, there was never a person I met that I could not make laugh.”

KURE, Shirley Anne
Nov 20, 2020 11:25 AM
WADE, Phyllis Eleanor (nee Colosimo)
Nov 20, 2020 11:19 AM
Comments
We welcome your feedback and encourage you to share your thoughts. We ask that you be respectful of others and their points of view, refrain from personal attacks and stay on topic. To learn about our commenting policies and how we moderate, please read our Community Guidelines.