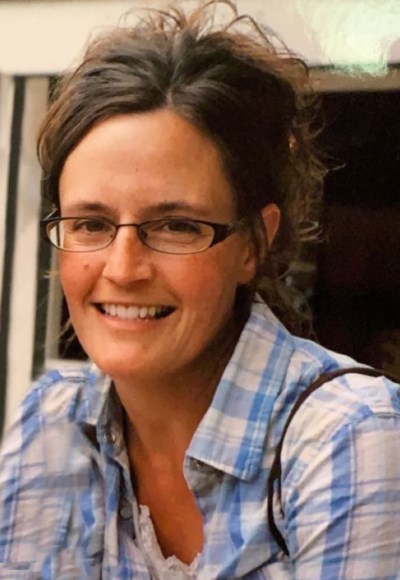 Peggie grew up in Hunter Lake, New Brunswick, surrounded by dear family, friends, and special cousins. Peggie graduated from Simonds High School in 1992. She then took a travel agent course, which led her to explore new places and meet new friends. Peggie moved to Alberta, where she married Layne Cornell. They lived in Brooks, Alberta with their two boys, Denver, and Keaghan, before moving to Innisfail, Alberta where their twins, Korbin, and Jesse, were added to the family.

Peggie shared her immense love of music with her boys, and all who were around her. Peggie enjoyed playing the organ and was often found playing the hymns for hours and hours, singing along with her sweet voice. She was creative, artistic, and had an entrepreneurial spirit, which she expressed through Peggie’s Eyeglass Charms, and her many handmade bookmarks. Peggie’s many other talents included hair styling, and we fondly remember the times she would sing along as she would cut and style. When Peggie came to visit, she never showed up empty handed, but always had treasures and treats– a true testament of how thoughtful and kind she was.

Peggie fiercely loved her four boys, her family, and friends, especially her mom, Carol, and her animal companions. We cherish every precious memory, every bout of laughter, and every warm embrace.

Our dear Peggie faced mental health struggles, yet, throughout her battles, she remained focused on her eternal goal, and looked forward to the day that she would be with Jesus and her heavenly Father.

In lieu of flowers, all are welcomed to make a donation to Brooks Animal Protection Society (BAPS) in Brooks, Alberta, who so kindly made arrangements for three of Peggie’s beloved pets.

A virtual service will be held on Thursday, December 31, 2020 at 1pm through Thom’s Funeral Home in Duchess, AB. Interment to follow at Brooks Cemetery.