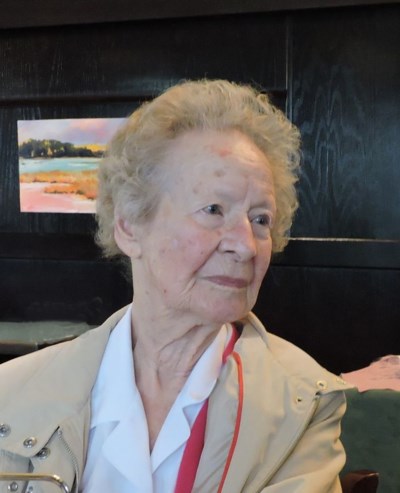 Mrs. Francis ‘Olive’ Fairchild-Lund of Innisfail, Alberta passed away at the Innisfail Health Centre on Wednesday, December 23, 2020 at the age of 104 years.

Olive was born on November 25, 1916 in Aldergrove, British Columbia. She grew up with her four younger siblings in the farming community of Matsqui, British Columbia. They lived with the Sumas Mountain as a backdrop to the small farm owned by her parents, Frank and Helen Smith.  When she married John Fairchild, who worked jobs that required travel, they lived in a number of places, including Ladysmith, British Columbia. She frequently mentioned the many fond memories of that location, in particular.

John and Olive later moved just east of Innisfail, where they farmed. Finally, she moved into the town of Innisfail. Olive was one of the first owners to move into the newly built Piper’s Landing Condo in Innisfail, back in 2003; where she continued to reside up until her brief hospital stay.  Olive had very strong ties and bonds with the residents there; with whom she enjoyed the many visits and connections. She also had other friends outside of the condo complex, who she stayed in contact with as well.  Olive loved to play cards and she was always a formidable and challenging opponent.

When she became a centurion, Olive was asked what had been the biggest “change” she felt had occurred for her, over the one hundred years of her life. She replied “the telephone”; as it suddenly made the world so much smaller, and communication so much easier.

Olive will be lovingly remembered by her youngest sister, Margaret Wagers of Innisfail, and a number of nephews and nieces.

A Family Memorial Service will be held at a later date. Olive will be buried alongside her first husband, John in the Innisfail Cemetery, Innisfail, Alberta. If desired, Memorial Donations in Olive’s memory may be made directly to S.T.A.R.S., Box 570, 1441 Aviation Park N.E., Calgary, Alberta, T2E 8M7 or at www.stars.ca, or to a charity of the donor’s choice. Condolences may be sent or viewed at www.heartlandfuneralservices.com. Arrangements in care of: Heartland Funeral Services Ltd.  4415 – 49 Street, Innisfail, Alberta. Phone: 403.227.0006   Fax: 403.227.6437