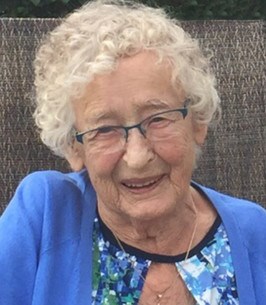 Carrie was born in Steinbach, Manitoba, October 14, 1930 to Aaron and Katherine Reimer.  With her parents and 9 siblings they made their way across the prairies living at Clearspring Manitoba, Crooked Creek and Linden.   Growing up in good times and hard times is where Carrie developed her character.  Loving, compassionate, hard working and generous were just some of the words used to describe this wonderful person. Her kind and compassionate spirit led her to a profession in nursing.  In 1950 she attained the Licensed Practical Nurse certificate and set off to put her skills into practice.  While nursing in Cardston, AB she met a handsome driller named Tom Courtney. Courtship led them to joining their lives in marriage. Mom and dad worked hard at various things to support their family of 5.  Collectively they worked in healthcare, in the oil patch, as dairy farmers, welding and in business as the owners of Courtney Berg Industries.  They worked as a team and respect and love for each other was evident.

Carries’ most fulfilling roles were as wife, mother and grandmother. Her husband Tom was her partner in life.  They worked hard together and in retirement were able to travel, spend time with family and friends and winter in the California sunshine.  Together they made a happy home in Ferintosh, Linden, Innisfail and Olds.  Carrie was a loving mother and proud of each of her children and loved their spouses as her own children.  Being a mother, grandmother and great grandmother gave Carrie an opportunity to prove that love is endless and grows and grows.  Each grandchild knew without a doubt how much she was interested in their lives and how much she loved them.

She left us quickly and peacefully January 14, 2020 in Olds, AB at the age of 89.  She will be missed greatly by Tom Courtney her husband of 67 years, her children Cathy and Neal Westlund, Lynn and Murray Regehr, Cindy and Marvin Hoyme and Jim and Sandy Courtney and her 14 grandchildren and their families.  Sisters Bernice (Jac) Reimer, Anne Baerg, Howard (Edith)Reimer, Ralph (Jeri) Reimer, Gilbert (Marilyn) Reimer, sister in laws Susanne Reimer and Doreen Reimer and numerous nieces and nephews.   She was predeceased by her infant son Tommy, son Derrick, great grandson Brady Regehr, twin brother Denver Reimer, sister Dixie Gales, sister and brother in law Violet and Albert Baerg, brother Fred Reimer, brother in laws Weldon Gales and  Arnold Baerg.

A memorial will be held at the Olds Legion Hall on January 22, 2020 at 11am with lunch to follow.

If friends so desire, memorial donations may be made to The Alberta Children’s Hospital Foundation, 28 Oki Drive NW, Calgary, AB T3B 6A8, Telephone: (403) 955-8818 in support of the Rotary Flames House. www.childrenshospital.ab.ca Or Muscular Dystrophy Canada at   www.muscle.ca

BEATTIE, John Allan Francis
Jul 27, 2020 9:44 AM
Comments
We welcome your feedback and encourage you to share your thoughts. We ask that you be respectful of others and their points of view, refrain from personal attacks and stay on topic. To learn about our commenting policies and how we moderate, please read our Community Guidelines.