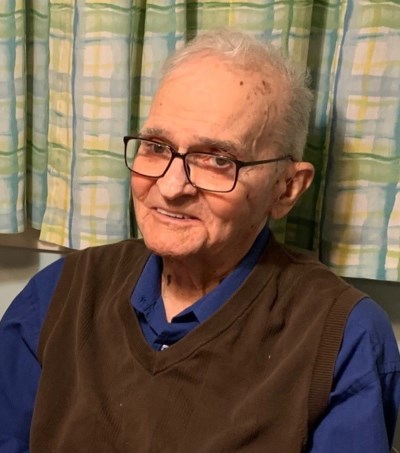 With sadness the Boulet family announces the peaceful passing of loving husband, father, grandfather, and great-grandfather, Roland (Rollie) Lucien Boulet, on April 29, 2020 in Olds, AB at the age of 92.

Born on the family farm near Storthoaks, SK on December 8, 1927, Rollie lived a long, full and happy life. He grew up in Dumas, SK surrounded by brothers Norman and Lucien and sisters Louise, Helene, Lucienne, and Therese, prairie skies and a curiosity about the world around him. Always proud of his French-Canadian heritage, Rollie received his secondary education at College Mathieu in Gravelbourg, SK. After completion of his studies, he began work as a labourer for the Canadian Pacific Railroad in Dumas at the close of the Second World War. He eventually moved to Alida, SK where he bought grain for United Grain Growers in the early 1950s. He began working for Saconny Vacuum, which would later become Mobil Oil Canada Ltd., in 1955.

While in Alida, he met the love of his life, Angelina Boutin, and they were married on July 3, 1954 at St. Raphael Roman Catholic Church in Cantal, SK. Together they raised a family of five children: Colette (Norman), Daniel (Penelope), Twain, Ailwin, and Toby (Bernadine). With Mobil Oil expanding their operations, Rollie and Angelina accepted a transfer to Alberta in 1963, and they courageously built a new life for their family. Rollie became a Plant Operator for Mobil Oil at the newly built Wimborne, AB gas plant. They lived for a short time in Torrington (at the site of what would later become the World Famous Gopher Hole Museum -- a fact Rollie often enjoyed sharing), before settling in Olds in June 1964 in the same home they have lived in for the past 56 years.

The Boulet family grew to include six grandchildren: Salena (Jonathan), Michelle (Simon), Erin (Michael), Joel, Mariko, and Logan, as well as seven great-grandchildren: Kieran, Ryker, Moira, Myles, Andrew, Alex, and Henry. Rollie was immensely proud of them all. After a long and valued career with Mobil Oil, Rollie retired in 1989. He then devoted his time to his passion -- woodcarving. This kept him busy throughout the year, making good use of two workshops: the garage in the summer and his basement shop in the winter. He was completely self-taught, and his artistry was remarkable. His Santa Claus carvings, Santa canes carved from Christmas tree trunks dropped off by family and neighbours, chess sets, bellows, and totem poles are cherished by many. Each was a unique, one-of-a-kind, Rollie Boulet creation. In his retirement, Rollie liked to keep busy. A bicycle enthusiast and owner of many styles of bikes over the years, he could be seen riding around Olds through spring and summer. Rollie enjoyed chatting with friends and neighbours over coffee at Tim Hortons, and in the winter, he would cheer for his beloved Montreal Canadiens, the Olds Grizzlys, and his grandson’s junior hockey team, the Humboldt Broncos. As a talented storyteller, he could hold the attention of any audience. Rollie was an avid reader, with an ever-growing library from historical treasures to children’s pop-up books, which delighted his grandchildren. He installed a set of stage curtains in the playroom for the productions of Boulet Family Theatre; and he rarely passed on the chance to play or go for a bike ride with the young people in his life. His humour and his chuckle, his wit and his thoughtfulness will be greatly missed by all who know and love him.

Roland was predeceased by his parents Alexandre and Albertine; his sisters Louise, Helene, and Lucienne; and his grandson Logan. In lieu of flowers, donations to the Olds Rotary Athletics Park in Rollie’s name are welcomed. For information on how to make a donation, please contact: Town of Olds Community Services at 403-556-6981.

A formal funeral and celebration of Rollie’s life will take place in Olds once the current pandemic and social distancing restrictions are lifted. Details will be announced at a later date. The Boulet family thanks everyone for your kindness in remembering Rollie, for your support, and for keeping his family in your heart. Heartland Funeral Services Ltd., Olds entrusted with arrangements. 403-507-8610  www.heartlandfuneralservices.com