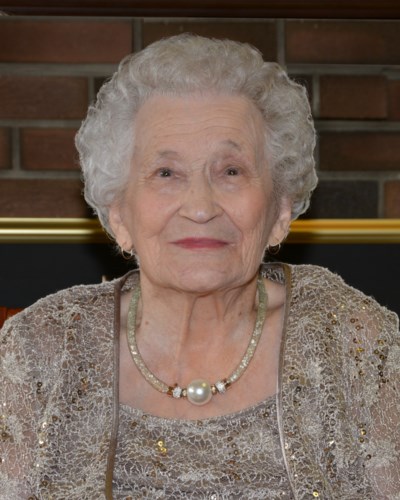 Clara Bogner our amazing and beautiful mom, grandma and great grandma passed away on June 18, 2020 at the age of 98 years. Mom was born and raised in Fraserton, Alberta, then made the big move to the city where she worked at the Calgary General Hospital. Calgary is where she met her husband Willie, they were married in 1953 and she moved to Didsbury where they lived and raised their family.

Mom was very devoted to her family and loved cooking for family and friends, from taking meals out to the thrashing crew on the farm, to the many holiday dinners, there was always food ready to put on the table. Her famous scrambled eggs were a favorite with the grandkids.

Mom spent almost 20 years as a farmer’s wife out at Westcott until moving to Didsbury in 1972, where she worked at Bill’s Gulf Service and later at the bakery until she retired in 1988. During her retirement she enjoyed looking after her grandson’s, until they went to school.

The family would like to sincerely thank the staff at the Aspen Ridge Lodge for all the loving care that was given to Mom while she lived there and all the support they provided to us over the years.  If friends so desire memorial tributes, in lieu of flowers, may be made directly to Aspen Ridge Lodge in Didsbury or Redeemer Lutheran Church in Didsbury.

KREIL, Tony Calvin
Jul 10, 2020 3:26 PM
Comments
We welcome your feedback and encourage you to share your thoughts. We ask that you be respectful of others and their points of view, refrain from personal attacks and stay on topic. To learn about our commenting policies and how we moderate, please read our Community Guidelines.