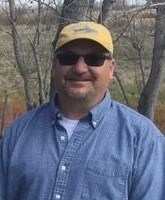 Terry was born in Kamsack, Saskatchewan, but made Innisfail, Alberta his home for 31 years. He grew up on a farm where he could ride his dirt bike through the fields, help his dad flood the front yard for the annual skating rink and practice his home run swing from home plate on the family baseball diamond. While growing up he was involved in hockey as a goalie with the Kamsack Flyers in the winter season and playing fastball in the summer with Brandon School and other local teams. As he grew older, golf became his passion where he could tease his friends as they sliced their ball into the trees. T-Bone will be known for his teasing, sense of humor, gathering with friends, singing karaoke, his chef qualities for making beef jerky and borscht, and living life to its fullest. He always made his way back home to connect with his small-town roots and visit with family and childhood friends.

Terry’s memory and life story will live on through his parents Tony and Jean Bobyk, sister Theresa (Richard) Eng, his niece  Desiree (Michael) Wirll and their daughters, Aliyah and Berkley, his niece Kiandra Eng, his sister Alicia Bobyk, his daughter Rachel Bobyk; partner of 17 years Annette Cowie and her sons, as well as numerous aunts, uncles, cousins, friends, and colleagues at Bilton Welding and Manufacturing Ltd.

Terry was predeceased by his paternal grandparents Fred and Francis Bobyk, Aunt Marie and Uncle Joe Boisvert, his maternal grandparents Walter and Pauline Witowski, Aunt Pearl Raiter, Uncle Walter Witowski Jr, and Uncle Henry Yakimoski. A Memorial Service was  held at the Innisfail Golf Club Tournament House on Friday, July 17, 2020 at 2:00 p.m. A Celebration Service in Kamsack, Saskatchewan will be announced at a later date.

Memorial Donation may be made directly to Innisfail Royal Canadian Legion Branch #104, 5104 49 Ave, Innisfail where Terry was a registered member since 2013. The family wishes to express special appreciation to Marc Blondeau of Kushneryk Funeral Services in Wakaw, Saskatchewan for his compassion and additional assistance to the family. Tony, Jean and family wish to thank those who picked up the telephone, sent cards, brought food, drove family and sent flowers. Your thoughtfulness and kindness has helped us get through this time of heartache. Condolences may be sent or viewed at www.heartlandfuneralservices.com. Arrangements in care of: Heartland Funeral Services Ltd., 4415 – 49 Street Innisfail, Alberta Phone: 403.227.0006