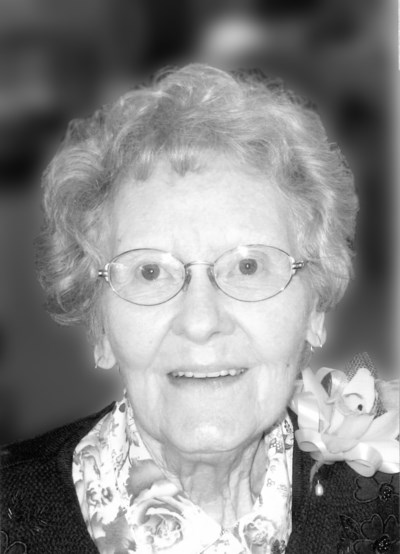 Betty May Downie passed away peacefully on Thursday, November 21, 2019 in Calgary, Alberta at the age of 96 years.

Betty was born on February 4, 1923 in New Cambria, Kansas, USA.  Betty immigrated to Canada with her parents, two brothers and one sister in 1924, homesteading near Rockyford, Alberta. She attended school in Nightingale and Calgary Normal School, graduating as a teacher. She taught in Brushy Lake where she met Maurice at a community dance; they were married in 1946.  They lived in Tudor before moving to Carstairs in 1950. Maurice was a grain buyer, initially at Wessex and then transferred to Carstairs in 1960.  Betty was a substitute teacher and worked at Beckner’s Men’s Wear, all the while raising a young family. She was actively involved in the community with UCW, I.O.D.E and Eastern Star. They moved to Calgary in 1972.

If friends so desire memorial donations may be made to the Canadian Cancer Society or the charity of their choice. A Celebration of Betty’s life will be announced at a later date.Expressions of sympathy may be forwarded to the family, via the website: www.fostersgardenchapel.ca

KEIM, Linda Darnell
Jul 8, 2020 12:12 PM
Comments
We welcome your feedback and encourage you to share your thoughts. We ask that you be respectful of others and their points of view, refrain from personal attacks and stay on topic. To learn about our commenting policies and how we moderate, please read our Community Guidelines.