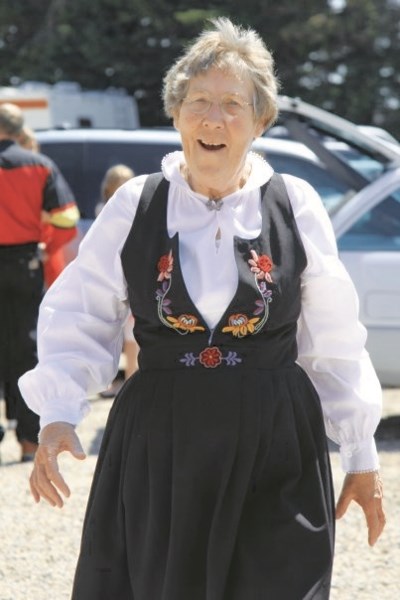 Catharina was born in Diepenveen, The Netherlands, and grew up in Nijmegen. The war years of 1944 and 1945 profoundly influenced her, and in 1950 she became a Baha’i.

In 1953, age 24, Catharina immigrated to Canada and found her way to the Rocky Mountains. She settled in Calgary where her daughter Mary was born, and Catharina made the difficult decision to give the baby up for adoption. In 1957, Catharina married Erik Poulsen. Over the next decade their children Bjarke, Albert, Ingrid, Christine, Kirsten, John and Laila were born.

They farmed at Rimbey, then moved to Bowden where the Poulsen children grew up. Catharina served on the Bowden library board, school board, parent teacher association, girls’ figure skating executive, Agricultural Society, and Summit Ladies’ Aid, and was a member of the local Baha’i community. She worked and took courses at Olds College, the scene of her joyful reunion with Mary. Her distinctive Dutch accent was well known on and beyond campus and she made rich, lifelong friendships.

Catharina was a strong promoter of literacy and the pursuit of knowledge. Following retirement from Olds College, she taught for a year in China, and at age 67 graduated with a degree in Adult Education. She tutored adults in English as a second language over the next 25 years, many of whom became good friends. In 2003 she moved to Canmore, where she treasured her time on the library board and with her book clubs, Tai Chi group, and Banff Centre concerts.

She travelled widely including Europe, Israel, India, China, Indonesia, Australia and New Zealand, Chile, Guatemala, and across Canada including the Yukon and Maritimes. The Alberta foothills were her idea of perfection.

Catharina wrote her memoir, The Nut from Nijmegen, for her 90th birthday. It is available at the Bowden and Canmore Public Libraries.

Catharina particularly wished to thank her loving son and long-time caregiver John, and the wonderful staff at Canmore General Hospital for their kindness.

She was also thankful for the continuous support of her neighbours Clint, and Len, Brenda and Cricket; book club members; Tai Chi friends; the ESL group; and her cherished Banff Centre concert trio Traudl, Marlise and Carolyn.

Her family would like to thank Joan Young and the Baha’i community, for the grace and dignity with which they cared for Catharina at her time of passing.

In lieu of flowers and gifts, plant a tree in memory of Catharina. See https://www.alivingtribute.ca/

KURE, Shirley Anne
Nov 20, 2020 11:25 AM
WADE, Phyllis Eleanor (nee Colosimo)
Nov 20, 2020 11:19 AM
Comments
We welcome your feedback and encourage you to share your thoughts. We ask that you be respectful of others and their points of view, refrain from personal attacks and stay on topic. To learn about our commenting policies and how we moderate, please read our Community Guidelines.