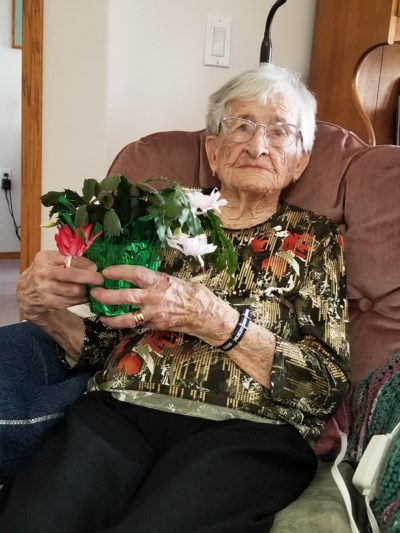 The family of Norah E. (Betty) Andrew are saddened to announce her passing on New Year’s Day 2021 at the age of 97 years at Olds Hospital.

Betty was born in the Neutral Hills of central Alberta to a family of seven. She attended normal school in Edmonton that began her thirty-five year teaching career. After retiring from Olds Junior - Senior high school, Russ and Betty spent ten glorious winters in Arizona. Betty loved to travel; visiting New Zealand, England, Spain and Hawaii; and golf, capturing a hole in one before she quit well into her 80s. Betty was a long-time member of St. John’s Anglican Church in Olds. She was an avid supporter and worker in many different roles.

Betty leaves to mourn her passing her children, Eric (Susan)of Olds, Sheila (Cal) Heinrich of Lethbridge and Rhoda (Terry) Carter of Coaldale; as well as six grandchildren and nine great-grandchildren, Chris (Kelly) Andrew, Cayden and Sheya, Justin (Monica) Andrew, Claire, Sam and Alex, Kelly (Jen) Andrew, Hanna and Hailey, Julie Heinrich, Kelsey (Brook) Heinrich, RaeAnne Carter and Beckham and Bowie. She is also survived by her brothers, Nelder Boulton of Gabriola BC, Eric (Sue) Boulton of Gabriola BC; five sisters-in-law, Marilyn Boulton, Ethal Osberg, Evie Andrew and Helen Andrew; as well as many cousins, nieces and nephews.  She was predeceased by her husband Russel in 2015; her brothers, Russell and Basil, her sisters, Helen and Meg.