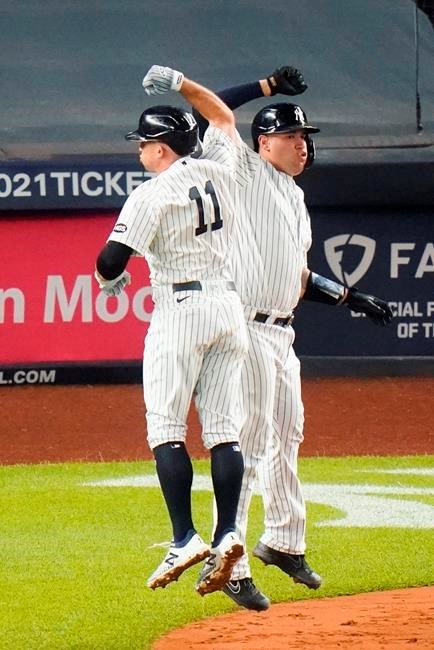 NEW YORK — Brett Gardner, DJ LeMahieu and Luke Voit homered on consecutive pitches for the New York Yankees -- and that was just the start of the night’s power surge.

By the time the Bombers’ barrage was over, the Yankees had hit a record-setting 1.42 miles of home runs in a three-game sweep of the Toronto Blue Jays.

The Yankees tied a major league record with five home runs in an inning and hit six overall in a 10-7 win Thursday night that extended their winning streak to eight.

“What a show!” Gary Sánchez, who also homered, said through a translator.

New York set a major league record for most home runs in a three-game span with 19 — three more than the previous high — and became the first team with six or more home runs in three straight games. The Yankees (29-21) outscored Toronto 43-15 over the three games and outhit the Blue Jays 44-28, opening a 2 1/2-game lead over the Blue Jays for second place and closing within one game of Minnesota (31-21) for a first-round playoff series at home.

Aaron Hicks struck out, and Giancarlo Stanton and Gleyber Torres followed with home runs that gave the Yankees a 9-2 lead and chased Anderson. The Yankees hit five homers in an inning for the first time, the seventh big league team to achieve the feat.

“That was a lot of fun.” Yankees manager Aaron Boone said. “Obviously a tie game going into that inning and then everyone just started unloading with real good at-bats.”

“It was awesome,” said Stanton, who had four hits for the first time since July 23, 2018. “In general it was just amazing to see everyone contribute like that.”

Sánchez, slumping for most of the season. added a seventh-inning homer off T. J. Zeuch for a 10-3 lead and raised his average to .145 with his first multihit game this year.

After losing 15 of 20 games and nearly dropping out of the AL’s eight playoff spots, the Yankees have outscored their opponents 71-20 over their winning streak.

Masahiro Tanaka (3-2) allowed three runs and seven hits in seven innings, striking out five. Tanaka has thrown at least five innings in each of his last five starts.

Anderson gave up seven runs and eight hits in 2 2/3 innings. He thought he may have been tipping pitches.

“Yeah, I think they put some good swings on all those pitches, so I (was) kind of wondering if I was doing something,” Anderson said.

Toronto closed in the ninth against Jonathan Holder on Danny Jansen’s run-scoring single and Cavan Biggio’s bases-loaded walk. Aroldis Chapman relieved with the bases loaded and gave up a two-run single to Bo Bichette, then struck out Randal Grichuk and Teoscar Hernández for his third save. Chapman threw fastballs on all 12 pitches, ending the game with a 101 mph pitch that Hernández swung under.

“We could have just said OK, they’re swinging the bats great, we’re done. We came back and made them use their closer,” Blue Jays manager Charlie Montoyo said.

Lourdes Gurriel Jr. was 3 for 3 with two homers off Tanaka and added an infield single in the ninth. He is 11 for 20 with three homers and five RBIs against the Yankees this season.

“Other than that, I feel like I did a pretty good job out there,” Tanaka said through a translator. “I had good command and good control.”

Zeuch and right-hander Wilmer Font joined the Blue Jays and made appearances. Font was activated from the 10-day injured list and Zeuch was recalled from the alternate site. Toronto optioned reliever Hector Perez and placed Jacob Waguespack on the 10-day IL with a strained back.

Blue Jays: Hernández returned to action for the first time since Sept. 5, going 0 for 5 with four strikeouts after recovering from a left oblique injury. … 1B Rowdy Tellez (strained right knee) is riding a stationary bike but has also begun walking better, according to Montoyo. … RHP Nate Pearson (elbow tightness) remains at Rochester where he continues to throw. The club hopes to build him up as a reliever, noting that there is not enough time left in the season to stretch him out as a starter. … RHP Matt Shoemaker (shoulder inflammation) threw 45 pitches on Wednesday and felt good Thursday. He is expected to throw live batting practice soon and could return as an opener or a reliever.

Yankees: OF Aaron Judge was given the night off, as Boone attempts to keep his All-Star slugger healthy for the . Judge was hitless in his return from the injured list Wednesday, his first action since re-aggravating a strained right calf on Aug. 26. … Torres (quad tightness) returned to the lineup for the first time since Sunday and went 1 for 5.

Hamilton stands alone in Formula One after 92nd victory
Oct 25, 2020 11:50 AM
Comments
We welcome your feedback and encourage you to share your thoughts. We ask that you be respectful of others and their points of view, refrain from personal attacks and stay on topic. To learn about our commenting policies and how we moderate, please read our Community Guidelines.