Ujiri confident in restart, saying 'the NBA is a seriously well-oiled machine' 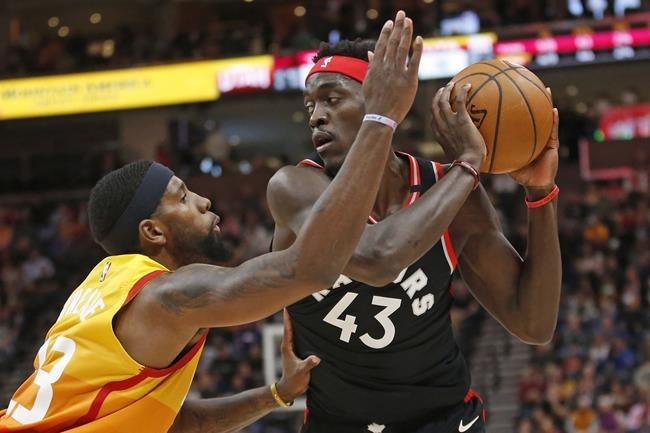 The Toronto Raptors' return to basketball has them living in an otherwise empty hotel in the Fort Myers area of Florida, a COVID-19 hotspot that has seen new cases skyrocketing.

They wake up to almost daily testing for the coronavirus before driving in staggered small groups to Alico Arena, home of the Florida Gulf Coast University Eagles, for the closest thing to a practice that's allowed — one player and two coaches per hoop.

They return to eat in a dining room with tables widely spaced out.

"Everybody stays safe, stay put in your room, and obey the rules," said team president Masai Ujiri. "They go to the gym, and do their practices, and come back."

The Raptors were the first team to arrive in the Sunshine State ahead of the NBA's scheduled July 30 restart, choosing to convene in Florida because of Canadian laws that would have required players to self-isolate for 14 days in Toronto.

"This pandemic has been very unpredictable, especially in the States. . . (We just didn't) want it to be a situation where guys were just sitting down for 14 days and not being able to do anything, so we kind of came up with this idea."

Group workouts can begin once the Raptors check into the "NBA campus" at the Disney complex in the Orlando area. All 22 teams, which can bring 37 players and staff members apiece, arrive at the quasi-bubble — Disney employees won't be subject to the NBA's quarantine procedures — between July 7 and 9.

There's been over 145,000 positive cases of the novel coronavirus in Florida as of Monday morning, with 5,266 new cases reported Monday. Over 3,500 Floridians have died from the virus.

The league announced 16 players have tested positive, but when asked whether any Raptors were among that list, Ujiri deferred to NBA protocol. The league isn't expected to divulge which players tested positive.

While NBA commissioner Adam Silver acknowledged on a conference call Friday that "the level of concern has increased," Ujiri is confident in the league's ability to keep his team safe.

"The NBA is a seriously well-oiled machine," Ujiri said. "They're going to try and make this whole event or the campus hopefully a great experience for everybody that has the opportunity to experience it.

"And then for people outside, everybody wants to see the game come back. . . sports has just been something missing in our lives, and makes us happy, brings people together, I think it will help restart some sort of happiness or some sort of joy in seeing the game back again."

The defending champion Raptors, who open the eight-game seeding round on Aug. 1 versus the Los Angeles Lakers, were second in the Eastern Conference and had just clinched a playoff spot when the league shuttered on March 11 after Rudy Gobert's positive COVID-19 test.

If the Raptors go all the way to this year's Finals, they'd be at the Disney campus for three months. Players will be permitted to have their families join them after the first round of the playoffs.

Ujiri believes his team has what it takes to manage the unique challenge that sort of isolation poses.

"Mental toughness, chemistry, just the way our guys are built, the experience we've had being together for a long time," he said. "The chemistry of the team is so important, and the belief in themselves. I think there's great camaraderie with them.

"And yes, there's going to be concerns, but our guys are being responsible as much as we can in these situations. Yes, there's family concerns, everybody is going to miss their families, and these are tough situations. But there's a passion for basketball and a love for the game, to play the game at a high level."

Fred VanVleet, who was the first player to arrive last week at Toronto's eerily-empty hotel — it was closed prior to the team's arrival, so they're the only guests — plans to have his partner and their two young kids join him when permitted.

"I've been gone a week and I miss my kids already," VanVleet said.

The 26-year-old guard said he was "pretty concerned" about convening in Florida, but he's trying to remain optimistic.

"It sounded good a month or two ago, not so much right before we got ready to leave. I think for the most part I just put the trust in the organization and understand that I don't think they would put us in extreme risk, trust the NBA," VanVleet said. "Hopefully they prove me right and not wrong. It's not the most ideal situation but it's kind of the times we are in. It hasn't been ideal for anyone."

VanVleet said he spends his free time catching up on sleep and playing video games. What does he see as the biggest challenge of being cooped up in a confined space for three months?

"There's a long list," VanVleet said. "If you want to find a million different little things to be wrong they will be there for you."

VanVleet said food was one of his first concerns. Being fed by the same chefs every day, the food options will become "bland" pretty quickly.

"My hope is once we start playing we just get back into the flow of what we are used to and you will play and eat a sleep and hang out and then play again and before you know it, it will be over."

"We're going to have to beat great teams no matter what the situation is, there's no cupcakes in this thing so it's going to be tough for anybody, but I like our chances," VanVleet said. "I love the group that we have."

"We have a team that's going to take it seriously and we're all excited to get back to playing — whatever that looks like — and I know we've got a lot of hungry, driven guys that want to win no matter what it is; it could be ping-pong or FIFA or whatever. Guys want to win around here so I'm looking forward to it."

If all goes well, the playoffs would begin in mid-August. Game 7, with the Finals going to mid-October.

This report by The Canadian Press was first published June 29, 2020.

Raptors Uprising GC retains three star players for 2021 NBA 2K League season
Sep 23, 2020 11:01 AM
Comments
We welcome your feedback and encourage you to share your thoughts. We ask that you be respectful of others and their points of view, refrain from personal attacks and stay on topic. To learn about our commenting policies and how we moderate, please read our Community Guidelines.