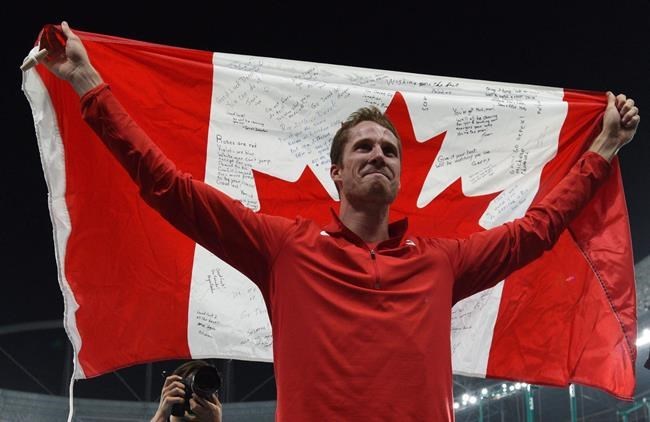 Between travel restrictions, quarantine requirements and a competition schedule drastically altered by COVID-19, Canada's track and field athletes have faced massive hurdles on the road to Tokyo.

For many of them, the last chance to punch their ticket comes this weekend at the Olympic and Paralympic Track and Field Trials at Montreal's Claude Robillard Sports Complex.

And just a few weeks ago, even the Olympic trials were in doubt.

"This whole thing has been a puzzle wrapped in an enigma wrapped in something else, I don't know what else," said Mathieu Gentes, Athletics Canada's chief operating officer. "This has been the most stressful, most complicated, tiring and frustrating process. (However) I'm happy it's happening . . . the reason we keep telling ourselves, this is an awesome opportunity for our athletes that we've been able to deliver in pretty difficult circumstances."

Athletics Canada only got the go-ahead to host the event, which is closed to all spectators including media, three weeks ago.

"In April and May, Canada was on fire with COVID and we were teetering on having to cancel the event, or having public health cancel it on us," Gentes said. "Because it's in Montreal, I keep using the analogy that we were like the Habs down 3-1 to the Leafs, that's how bad it was a couple of weeks ago."

The trials are invitation-only and the competition program is limited to events with Olympic or Paralympic qualification implications.

Athletes can either punch their ticket to Tokyo by achieving an automatic entry standard, or by their world ranking, which is calculated in points scored over several meets. Bigger meets, including the trials, are worth more points.

"If even one athlete can go to Montreal this weekend and either make a standard that they didn't have, or win or finish second in their event, get the bonus points, combined with a decent time, and now they're in the ranking selection pool for World Athletics, and they make the team, right?" Gentes said.

Athletics Canada announced several months ago that attendance at the trials wasn't mandatory to make the Tokyo team if athletes had the qualifying standard. Three-time Olympic sprint medallist Andre De Grasse, who lives and trains in Jacksonville, Fla., for example, won't be in Montreal this weekend having already earned his spot.

Athletics Canada, in a partnership with Bell, is offering free online streaming of the event which runs Friday through Sunday at www.AthleticsCanada.tv.

Here are some key events to watch:

— Men's high jump: Defending Olympic champion Derek Drouin, who's been hampered by numerous serious injuries the past few years, including a third Achilles tear that sidelined him this past winter, takes a last stab at qualifying. The qualifying standard is 2.33 metres. Drouin's best this season is 2.24, but his Canadian record is 2.40.

"I'm really proud right now of how close we are," said Drouin. "I know there's obviously work that still needs to be done. And it would be amazing. And to the Cinderella story if I if I could get myself on that plane to Tokyo.

Drouin will come out of a two-week quarantine — he's been using a rowing machine and running in a backyard pool to maintain fitness — just in time to compete.

The 31-year-old, who's ranked No. 80 in the world based on the small number of meets under his belt, is excited to compete against fellow Canadians Michael Mason (No. 6) and Django Lovett (No. 31).

— Women's 800 metres: World silver medallist Melissa Bishop-Nriagu has all but punched her ticket to Tokyo having dipped under the automatic standard of one minute 59.50 seconds. But hot on her heels are Madeleine Kelly and Lindsey Butterworth, who are both less than a second off the standard.

— Men's and women's 1,500 metres: Charles Philibert-Thiboutot, a 2016 Rio Olympian, has been chasing the standard and ranking points at meets in Europe, but his best is about two seconds off the mark of 3:35.00. On the women's side, Lucia Stafford looks to join her sister Gabriela DeBues-Stafford on the Tokyo team. She's less than a second off the standard of 4:04.20. She'll be pushed by Julie-Anne Staehli, who's already dipped under the Tokyo standard in the 5,000 metres.

— Men's 5,000 metres: Ben Flanagan will be looking to challenge Luc Bruchet for the final spot in the men's 5,000 metres. Neither world bronze medallist Moh Ahmed, nor Justyn Knight, will compete at nationals having locked up their spots. Bruchet is the front-runner for the third opening having achieved the Olympic standard a couple of weeks ago. Flanagan's best is about 12 seconds behind him.

— Men's and women's sprints: Aaron Brown is the one to watch in the men's 100 and 200 metres. He and Andre De Grasse have already run the automatic standard over both distances, so Brown will be looking to fine-tune a few weeks out from Tokyo, and perhaps push some fellow sprinters to fast times. Gavin Smellie and Jerome Blake are among the runners looking to join De Grasse and Brown in Tokyo.

— Men's 110-metre hurdles and long jump: Decathlete Damian Warner has already secured his Olympic berth, so will use the two events for some finetuning. Last month, Warner shattered his Canadian record in the decathlon in Gotzis, Austria, recording 8,995 points — the fourth-highest score in history. It was a remarkable performance considering the 31-year-old was forced to train in an old, unheated hockey arena in London, Ont., through the winter due to border restrictions and COVID-19 facility closures. It was also his first decathlon since the 2019 world championships.

This report by The Canadian Press was first published June 24, 2021.