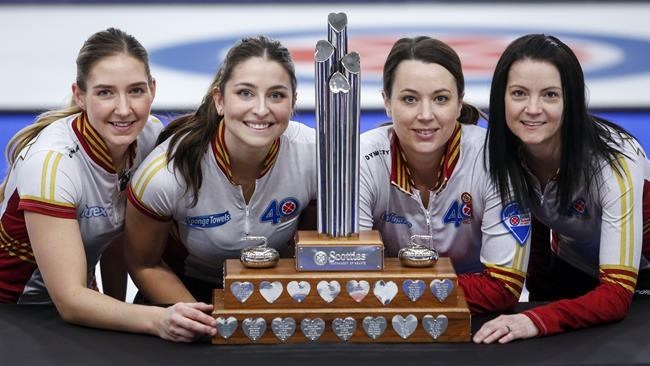 Ratings for the Canadian women's curling final tumbled significantly compared to the 2020 final when the same teams met for the championship.

Defending champion Kerri Einarson defeated Ontario's Rachel Homan 9-7 in Calgary last Sunday night in a final that drew an average audience of 682,000 viewers, a TSN spokesman said in an email.

That was down about 30 per cent from the average audience of 979,000 viewers who watched last year's final in Moose Jaw, Sask., according to Numeris data.

Both finals were close matchups that were decided late in the game. Einarson made a game-winning draw in an extra end last year to win her first Scotties Tournament of Hearts title.

Homan forced a 10th end this year by stealing a pair in the ninth. Her final shot was a freeze attempt that slid too far, giving Einarson a two-point victory.

The event was held in a spectator-free environment at the Markin MacPhail Centre due to the COVID-19 pandemic.

Overall, the 10-day competition was watched by more than 4.7 million Canadians, according to TSN. The event garnered record engagement on TSN’s digital platforms, with over two million video starts and nearly three million page views, the network said.

Ratings for the opening weekend of the Hearts were down about 17 per cent from the same time period last year. Other sports have experienced similar ratings declines after pausing due to the pandemic.

The Canadian men's curling championship will be the second of six events to be held in a so-called bubble setting at the Canada Olympic Park venue.

The March 5-14 Tim Hortons Brier will be followed by the March 18-25 Canadian mixed doubles championship, the April 2-11 world men's playdowns, the April 14-18 Champions Cup and the April 20-25 Players' Championship.

Einarson will represent Canada if the world women's curling championship is rescheduled this season.

The World Curling Federation recently cancelled the March 19-28 event in Schaffhausen, Switzerland. The local health authority did not provide permission due to the pandemic and concerns around the spread of new variants, the WCF said.

A rescheduled world championship hasn't been ruled out for this season but the WCF has suggested the creation of an alternate event in early fall is more likely.

The 2021 world championship was to be the main qualifier for the Beijing Winter Olympics.

Einarson didn't get a chance to represent Canada after the 2020 worlds in Prince George, B.C., were cancelled last March due to the pandemic.

If a world championship/alternate event is played next season, the Hearts champion would be "factored into Canada's efforts to qualify a four-player women's team for the Beijing Games,'' Curling Canada said.