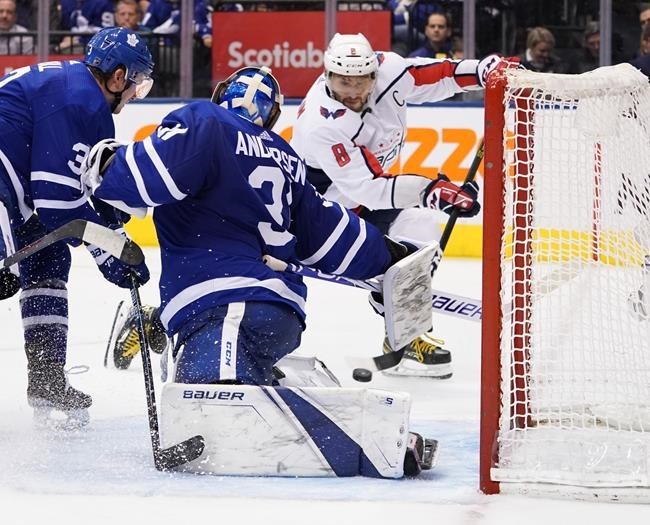 He then proceeded to back up those words in familiar, impressive fashion.

Ovechkin scored his second goal of the game on an overtime power play to put an exclamation mark on a four-point performance Tuesday as the Washington Capitals defeated the Toronto Maple Leafs 4-3.

Having endured repeated playoff failures before finally breaking through with his franchise's first Stanley Cup in 2018, the 34-year-old called the Leafs out for their approach in a sputtering start to the season following his team's morning skate.

"They're still a young group of guys, hopefully they're going to learn," Ovechkin said. "But it's up to them how they want to do it. If they want to play for themselves or if they want to win the Stanley Cup, they have to play differently."

Ovechkin helped set up goals by John Carlson in the first and second periods, tied the game four minutes into the third after Washington fell behind, and then won it on the Capitals' second man advantage of the extra session with one of his patented one-timers from the left face-off circle.

"The guys tried to feed me and finally I got a nice shot," said Ovechkin, who moved past Luc Robitaille into 12th all-time in the NHL with his 669th goal. "My job is to shoot the puck, create the moments for my team."

Auston Matthews, with two goals and an assist, and Andreas Johnsson replied for Toronto (6-5-3), which got 30 saves from Frederik Andersen.

Most of the Leafs said they'd heard Ovechkin's pre-game comments, including head coach Mike Babcock, who has been imploring his talent-laden squad to dig in and work harder to get out of its early funk.

"I don't know if he's wrong," Babcock said. "He knows because he lived it.

"It's the ultimate team game and you've got to sacrifice individual rights for team rights."

The Leafs have been bounced the last three springs in the first round of the playoffs, including two straight seven-game defeats to Boston.

On Tuesday, Babcock and his message might have been thrown a lifeline by one of the game's greats.

"One thing about it is it gets your attention — it hurts your feelings probably a little bit," he said before adding later: "You're not outscoring anybody at playoff time. You've got to out-defend and then your skill comes to the forefront. That's what he's talking about. Is that not a fair assessment?

"It hurts my feelings, I can tell you that. I'm the coach, I'm supposed to get all this organized. But we know this. We're working towards it every day."

"Everyone's going to have opinions on our group," Marner said. "We're a family. We keep everything tight-knit in here ... we play for each other and that logo."

"They've obviously (won) over there, but I don't think we have individuals in this room," Barrie said. "We've got a great, tight team. We're going to find our way."

After the Leafs killed off a penalty to William Nylander in overtime, Marner high-sticked Carlson a second before the first infraction expired.

That set up a 5-on-4 power play for the Capitals, who fed Ovechkin over and over before he finally got his booming shot on target to scored his 11th goal of the season with four minutes gone.

Washington's captain now has 41 goals and 73 points in 50 career games against the Leafs.

"We stayed patient," Marner said over his team's overall performance. "Unfortunate how it ended."

The Leafs got a power play — their eighth of the night — with three minutes left in the third when Radko Gudas was whistled for delay of game after driving Alexander Kerfoot into the Washington net.

Matthews, Nylander and Kasperi Kapanen all had good chances, but Holtby was there at every turn.

Tied 2-2 after 40 minutes, Matthews put the Leafs ahead early in the third when the Leafs centre buried his 11th. Toronto's power play had been 0 for 6 before finally connecting when he took a pass from Nylander and ripped a shot upstairs at 1:46.

The goal came after Tom Wilson took a run at Barrie, drawing a response from Leafs fourth-liner Frederik Gauthier.

But the Capitals tied things at 4:10 when T.J. Oshie stepped past Rielly — who logged more than 33 minutes of ice time with his team down to five defencemen after Wilson took Jake Muzzin out with a hit in the first — and fed Ovechkin.

The Capitals are now 6-0-1 over their last seven, including 4-0-1 on a season-long five-game road trip that took them through western Canada before wrapping up at Scotiabank Arena, and an NHL-best 7-1-1 mark away from home.

The Leafs, who played their league-leading ninth home game, opened the scoring just 40 seconds into the first when Matthews found Johnsson in front.

The Capitals got level at 10:47 when Ovechkin whipped that Carlson let bounce off the boards before one-timing a laser beam into the top corner for his sixth goal and 22nd point of October.

After the Leafs failed to connect on a 5-on-3 power play in the first, the Capitals got a two-man advantage of their own in the second and made it count when Carlson took a feed from Ovechkin and blasted his seventh — and 23rd point — to make it 2-1 at 7:59.

Carlson finished the month two points shy of the record of 25 by a defenceman in October set by Al MacInnis in 1990.

"They're going in more than they have before," the 29-year-old said.

Washington, which also beat Toronto 4-3 on Oct. 16, appeared set to head to intermission up a goal, but Matthews got the Leafs even with 32.9 second remaining on a slick deflection of Barrie's point shot.

Notes: Toronto defenceman Travis Dermott played his first game of 2019-20 after shoulder surgery for an injury sustained in the Leafs' first-round loss to Boston last spring.

This report by The Canadian Press was first published Oct. 29, 2019.