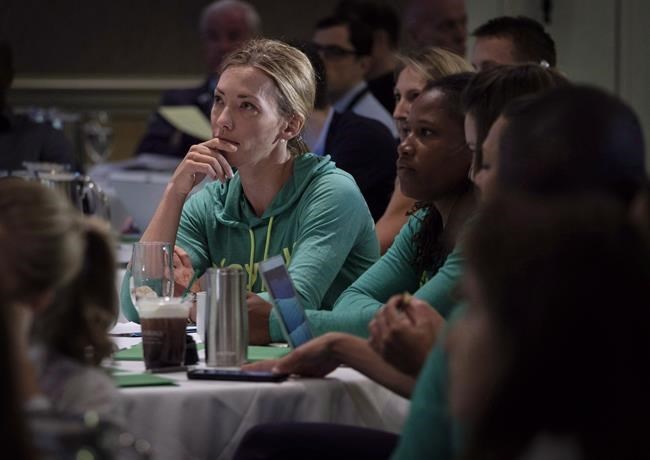 KATOWICE, Poland — The only reason Beckie Scott's going-away speech to the World Anti-Doping Agency wasn't her finest moment was because of all that led up to it.

Bruised, berated and criticized by some colleagues over a six-year tenure at the worldwide drug-fighting agency, the head of the WADA athlete's committee left on her own terms.

"I'm going to remind you for one last time," she said at Thursday's board meeting. "You have thousands upon thousands of athletes counting on you to do right by them. Not by any other stakeholder, but by them."

Scott is a Canadian cross-country skier whose own moment of Olympic glory was diminished by dopers. She finished third in the 5K pursuit but eventually ended up with a gold medal from the Salt Lake City Olympics. She didn't get it until 2004 — after cases were completed involving two Russians who were found to have been doping.

She received the medal in an art gallery in Vancouver.

It wasn't the last time Russians would make a lasting imprint on her life.

Her experience in Salt Lake City, and many more that others like her had endured, led her to seek a spot representing athletes at WADA.

One of her proudest accomplishments was getting an athlete charter of rights approved for entry into the WADA archives. That happened Thursday, the last day of her term as chair.

"My hope is that going forward, voices that challenge or dissent will be heard and taken into consideration rather than undermined or dismissed," Scott said. "And my hope is that going forward, balance and independence will be restored to these tables, so that all interests and priorities here are aligned with equality of opportunity and fairness, rather than the business of sport."

She received applause at the end of that speech.

That has not been the norm.

She has been under near-constant pressure inside the halls of WADA — largely dismissed, talked over and ignored through the years, especially as her voice grew louder in dissent of WADA's actions in the Russian doping scandal that has rocked the agency over the past five years.

Last year, Scott resigned her position from the agency's compliance committee, disgusted with its decision to reinstate Russia's banned anti-doping committee in exchange for a promise of receiving data from its Moscow lab.

That data, received past a deadline WADA set and under conditions the agency had originally deemed unacceptable, has been tampered with; next week, the same committee Scott resigned from will deliver another recommendation about Russia's fate.

But, Scott said, she stayed on in the athlete-representative role, "because I thought it was a cause worth fighting for."

It is not easy.

Roles in these worldwide sports organizations are accompanied by perks, new friends and expectations that don't always align with the priorities of the people, especially athletes, who elect their representatives. But once members are inside the circle, if they don't toe the line, they receive messages — some obvious, others more subtle — that their recalcitrance is not appreciated.

It happened a lot to Scott over six years.

"You're certainly treated very well, but I think with that comes expectations that you're a member of the club," Scott said in an interview after her speech. "For me, I felt that I was here as a representative of the athletes. And they're not part of this club."

The athlete's group Global Athlete put out a statement lauding Scott for standing up "to represent the voice of the majority — the clean athletes of the world."

"That took courage and it took fortitude, but thankfully the clean athlete community had a flag-bearer in Beckie," the statement said.

After the meeting was adjourned, Scott smiled and breathed deeply, maybe for the first time in a long time. She had considered not giving the speech, but once she got inside the room, she realized it was her time.

What she really wanted to do, she said while standing outside the meeting room, was to "remind them of what they're here for and who they're supposed to be making decisions on behalf of."

"That's been lost for years," Scott said. "Geopolitics and the business of sports have trumped athletes for too long, and it's time to get back to representing athletes. And if that's not happening here, then what's the point?"

Justin Douglas, Conor Trainor return to Canada rugby sevens squad in Los Angeles
Feb 28, 2020 3:23 PM
Comments
We welcome your feedback and encourage you to share your thoughts on this story. We ask that you be respectful of others and their points of view, refrain from personal attacks and stay on topic. To learn about our commenting policies and how we moderate, please read our Community Guidelines.