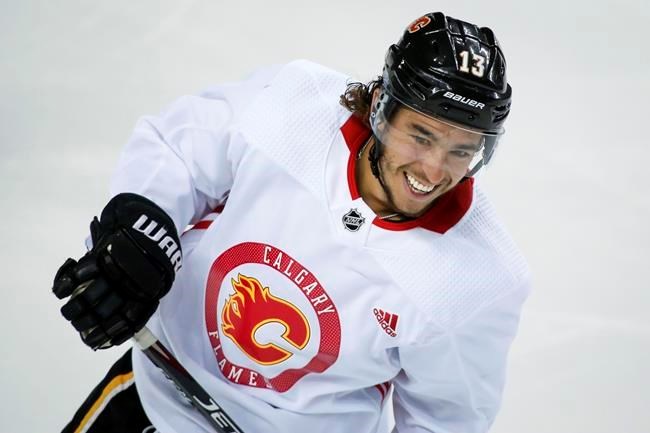 The Flames' top line not skating together is conspicuous given how much Calgary will lean on the trio to score on the Winnipeg Jets when the NHL season resumes next month in Edmonton.

Centre Sean Monahan and right-winger Elias Lindholm worked out with the larger group of 23 skaters Tuesday, while left-winger Gaudreau remained in a pod of nine.

The NHL forbids teams from commenting on the status of individual players, so the reason remains a mystery.

Lindholm tallied a team-leading and career-best 29 in his second season as a Flame.

Gaudreau led the Flames in assists with 40.

"As camp wears on at some point we're going to get them back together and it'll take off from there," Flames head coach Geoff Ward told reporters Tuesday on a video conference call.

"When we get them back together, they've had enough chemistry over time together through several years. I'm sure it's going to be like riding a bike when they do finally get reunited."

Flames forwards Dillon Dubé and Buddy Robinson have yet to hit the ice at training camp.

"When you play with such a good player, it's easy. You find open spots, play your game and he will find you. We'll see what's going to happen here in the next few days."

Gaudreau had two goals and three assists in his last five games before the season was suspended March 12 because of the COVID-19 pandemic.

The season is scheduled to resume Aug. 1 in the hub cities of Edmonton and Toronto, where 24 teams will pursue the Stanley Cup.

Calgary faces Winnipeg in the lone all-Canadian matchup of the best-of-five, play-in round.

Monahan and Lindholm haven't forgotten getting trampled in five games by the upstart Colorado Avalanche, however.

The Flames had just finished first in the Western Conference with 50 wins.

Lindholm and Monahan each scored once and Gaudreau had one assist against Colorado.

"We've talked about it a lot," Monahan said. "We got embarrassed. We got outworked, outcompeted. We got owned by Colorado. That sticks with you.

"You want to be a guy that can relied (on) to be a big part of post-seasons. That where a lot of guys' legacies are formed playing in the post-season and making things happen for their team.

"That's the type of players we want to be. We've got to step up here and take some charge going into Game 1."

He doesn't want another post-season chance with Calgary to slip away as quickly as the first.

"The second time here, obviously I want to build off the end of the season and come in with a good mindset," Lindholm said.

"You're kind of running out of opportunities. This is only my second time and I'm turning 26 soon. You know how tough it is to get in."

This report by The Canadian Press was first published July 14, 2020.

McDavid gets first playoff hat trick, Oilers beat Chicago 6-3 in NHL qualifiers
Aug 3, 2020 11:59 PM
Monday's Games
Aug 3, 2020 11:45 PM
Penguins beat Canadiens 3-1 in Game 2 to pull even in best-of-five series
Aug 3, 2020 10:00 PM
Comments
We welcome your feedback and encourage you to share your thoughts. We ask that you be respectful of others and their points of view, refrain from personal attacks and stay on topic. To learn about our commenting policies and how we moderate, please read our Community Guidelines.