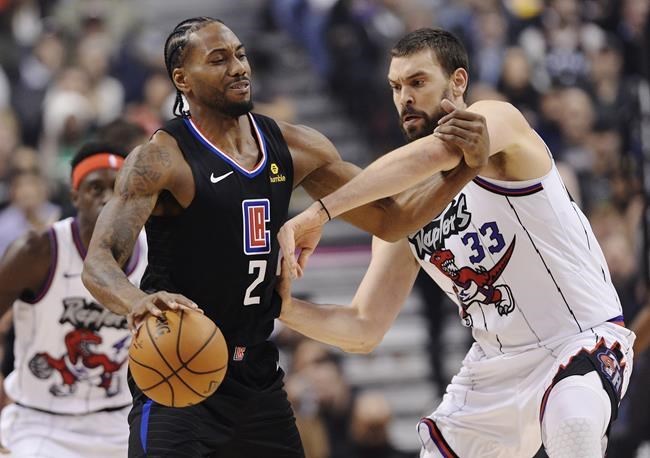 TORONTO — Marc Gasol's return to health has been an around-the-clock group effort.

After sitting out 12 games with a hamstring injury, the Raptors centre is expected to play on Wednesday when Toronto visits Oklahoma City.

"Hamstrings can be a little tricky," Gasol said after practice Tuesday. "But thankfully we have a great medical staff. They helped me tremendously every step of the way. And I brought some reinforcements from Spain to work around the clock, so it was awesome."

The 34-year-old Spaniard said it was frustrating to watch from the sidelines.

"Pretty much after the first week you don't feel it as much on normal movements, so you start jogging, it doesn't feel bad — your body's like, 'OK, I'm ready to play.' And obviously you're not because as soon as you take a long stride, you can re-injure it," he said.

The Raptors have gone 6-6 since the key trio went down in Detroit. Fred VanVleet, who's been sidelined the past three games with a hamstring injury, is the one key player the Raptors are missing.

Gasol is excited to have the team back at near-full strength, but also proud of how the young players responded to the next-man-up challenge.

"To go through it together as a team, go through ups, go through downs and stay even-keel, that's all that matters to me," he said. "That's the beauty of this game, that's what makes you a really good team, going through the processes as a team and getting better each and every night . . . That's what you do it for, to eventually win games as a group because it's a team sport."

The three-time NBA all-star is averaging 6.6 points and 6.6 rebounds in 27 games this year.

"He knows the game, he knows the game like the back of his hand," Griffin said. "Because his game is predicated on involving others and he's not going out there looking to score 30 points, he's out there to facilitate, run the offence, take the shot when it presents itself, but he's a tremendous team player."

Serge Ibaka has had some excellent games in Gasol's absence.

"That'll be great to have those two," Siakam said. "Obviously you need Serge back out there. And obviously Serge has been playing unbelievable the whole time with all the injuries. He's been great. Having those two guys coming in and out is a nightmare for the other team."