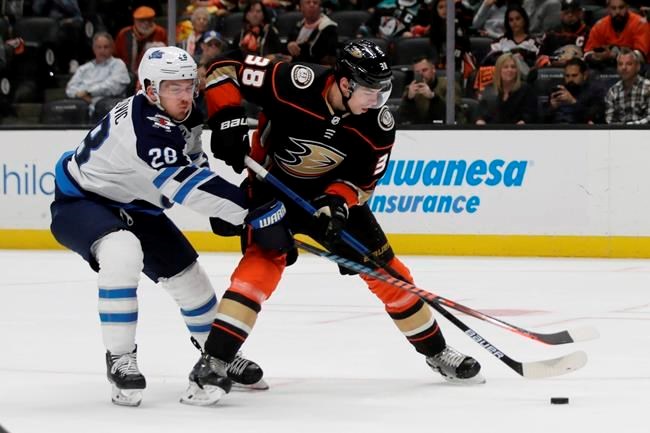 ANAHEIM, Calif. — Cam Fowler has been a reliable presence for the Anaheim Ducks on the blue line for 10 seasons. Josh Mahura, making his season debut and appearing in his 18th career game, is still trying to find his way in the NHL.

Together, the veteran Fowler and rookie Mahura powered the Ducks to another strong home win.

Fowler set a franchise record for career goals by a Ducks and John Gibson made 36 saves in a 7-4 victory over the Winnipeg Jets on Tuesday night.

Mahura tied an Anaheim rookie mark with three assists as the Ducks broke a four-game losing streak to the Jets.

"To see Mahura come up, he's a pretty calm D-man out there and he was moving the puck well. And obviously, Cam's been great for us all year," said Anaheim forward Carter Rowney, who scored twice.

Fowler tied it 1-all at 10:01 of the first period, scoring his 61st goal to pass Scott Niedermayer for the team lead among . Fowler, who did it in 634 games, scored on a wrist shot from the right circle following a quick breakout by the Ducks from their own zone.

Niedermayer scored 60 goals in 317 games during five seasons with the Ducks.

"To pass Scottie is something that's pretty special, obviously," Fowler said. "You're talking about one of the best to ever play the game, not even just with the Ducks. So you can never really mention yourself in that category, it's not really comparable. But to have your name mentioned in the same sentence with him is pretty cool."

However, the Ducks trailed 2-1 following the first period after Blake Wheeler put Winnipeg back in front at 12:02. Fortunately for Anaheim, Mahura provided a jolt in the second to put them ahead.

Troy Terry gave the Ducks a 4-3 lead eight minutes into the second when he scored on a breakaway set up by Mahura's long pass through the neutral zone. Derek Grant made it 5-3 at 9:10 when the rebound of a shot by Nicolas Deslauriers struck him in the arm and redirected in, prompting Jets coach Paul Maurice to pull Connor Hellebuyck after he allowed five goals on 19 shots.

The Ducks scored three goals in a span of 2:52, starting when Adam Henrique put them up 3-2 at 6:18, but Nikolaj Ehlers tied the game 42 seconds later.

Mahura had secondary assists on the goals by Henrique and Grant, becoming the fifth Anaheim rookie to get three assists in a game.

"It was such a dull first period for us, and we were just making head-shaking mistakes, something that's been pretty uncommon of us so far," Ducks coach Dallas Eakins said. "And I think Josh's fresh legs, not being beat down by that road trip, certainly not only helped his performance but helped ours as well."

Ehlers scored twice for the Jets, who have lost five of seven. Laurent Brossoit made seven saves in relief of Hellebuyck, who came into the game with a 5-0-1 record and 1.94 goals-against average versus the Ducks.

Bryan Little pulled the Jets to 5-4 at 6:39 of the third period, but Rowney scored on a breakaway with 3:48 remaining to make it 6-4. Rowney added an empty-netter with 2.9 seconds left.

"It was going back and forth a little more than we wanted it to, and they got some easy chances and scored on them. You can't give any team in this league too much ice to skate on, and we did that a couple times tonight. Something we've got to do better," Ehlers said.

NOTES: Jets RW Patrik Laine did not play after he left practice early on Monday following a collision with D Luca Sbisa. Laine had appeared in 182 consecutive games dating to March 26, 2017. ... Mahura is the eighth Ducks rookie to get three points in a game.