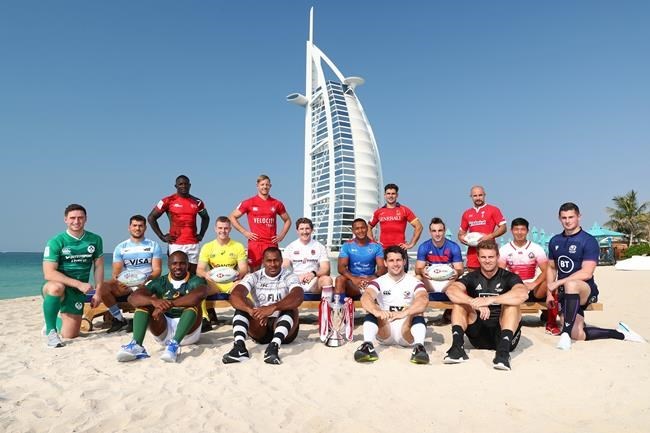 The Canadian men open the HSBC World Rugby Sevens Series in Dubai on Thursday free of the tumult that preceded last season.

It's the start of a journey that will take them to the Tokyo Olympics next July.

A bitter labour dispute cost the men most of their pre-season ahead of the 2018-19 campaign. The Canadians stumbled out of the gate and made the Cup quarterfinals just once in the first eight events, leading to the firing of coach Damian McGrath.

Henry Paul took over for the final two tournaments with the men tying for seventh in London, matching their best finish of the season, and placing ninth in London.

The Canadians finished 11th overall on the 10-stop World Series, enjoying success in the off-season under Paul by qualifying for the Tokyo Olympics after breezing through the Rugby Americas North Sevens in July in the Cayman Islands.

With the Americans already qualified by virtue of their second-place finish in the World Series, Canada went 6-0-0 in outscoring its opposition 293-15 en route to booking an Olympic berth for the first time.

Later that month, the Canadian men — who had won gold four years earlier in Toronto — collected a silver medal at the Pan American Games in Peru in a 33-10 loss to Argentina.

Paul, now full-time coach, is happy with his team's World Series preparations ahead of Dubai.

"We've had a really good pre-season, probably the best they've had — from talking to senior players — for a while," Paul said. "Ten weeks of real grind ... We had to get some real kilometres under our belt."

For Paul and Canada, the key is consistency. The Canadian men have shown in the past that on their day they can beat anybody. But that day has not come often enough.

"That's the million-dollar question," Paul said. "That's everything we've been working on over the last few months — is to find some reasons why."

"We've worked on finding our identity," he added. "Giving us a game plan and a framework, structures to work off. Different to before because we know before didn't work — or worked sporadically.

"I think we've managed to find our way. But we've got to go out there and play now. We get 10 stops to get it right before the Olympics."

Paul says he has consulted with the players throughout the process. Close ties with the 15s squad and the newly revived Pacific Pride Performance Academy under Jamie Cudmore have also helped the cause.

Paul was dealt a blow on the eve of the season with news that Adam Zaruba, a six-foot-five 262-pound game-changer whose resume includes trying out as a tight end with the NFL's Philadelphia Eagles, has been ruled out of the Dubai and Cape Town events with a lower-body injury.

Theo Sauder has been added to the roster with David Richard moving into the 12-man playing lineup. Richard, a member of the Pacific Pride, was on the sevens squad that went to Hong Kong and Singapore earlier this year and played for Canada's under-20 team.

"He's got all the attributes of a great sevens player," said Paul. "A smart kid. Really quick ... He can definitely finish."

Canada is still without speedster Justin Douglas, who is recovering from a broken fibula.

Lucas Hammond is nearing full fitness after working his way back from a foot injury. Andrew Coe, injured at the Rugby World Cup, is also on the comeback trail as is Admir Cejvanovic (groin).

"I think it's going to be a really competitive squad come February for the New Zealand and Sydney tour," said Paul.

Luke McCloskey missed out on selection for the Dubai-Cape Town events.

Veterans Nathan Hirayama and Harry Jones will co-captain the squad, allowing them to split media and other duties.

Born in New Zealand, the 45-year-old Paul represented New Zealand in rugby league and England in rugby union and sevens. Canada coach Kingsley Jones, who had worked with him with the Russia national team, hired him in May 2018 to serve as the men's 15s defence coach before the sevens opening beckoned.

Paul is on familiar ground at the Dubai Sevens.

He won the event in 2004 wearing English colours and spent 18 months coaching the Jebel Ali Dragons, a club team in Dubai, before joining the Canadian setup.

"I loved it," he said of his time there. "A really strong ex-pat community, so rugby had a big following."

Canada has been drawn in Pool C with defending champion New Zealand, Samoa and Wales. The All Blacks, who also won in Sydney and were runners-up in Paris, finished third in the World Series last season with Samoa sixth and Wales 14th.

Dubai marks the first of a record six combined men's and women's events on the circuit. In a first for the event, all 64 men's and women's games will be played on the main pitch with the Canada and Samoa men kicking off the program Thursday at 8:06 a.m. ET.

The Canadian women, who finished a disappointing sixth in the season-opening event in Glendale, Colo., in October, are in a pool with Brazil, Russia and the U.S.

After Dubai, the men and women head to South Africa for the Dec. 13-15 event in Cape Town.

This report by The Canadian Press was first published Dec. 3, 2019.

Enhanced crowd audio adds another dimension to fanless games
Jul 5, 2020 8:40 AM
Comments
We welcome your feedback and encourage you to share your thoughts. We ask that you be respectful of others and their points of view, refrain from personal attacks and stay on topic. To learn about our commenting policies and how we moderate, please read our Community Guidelines.