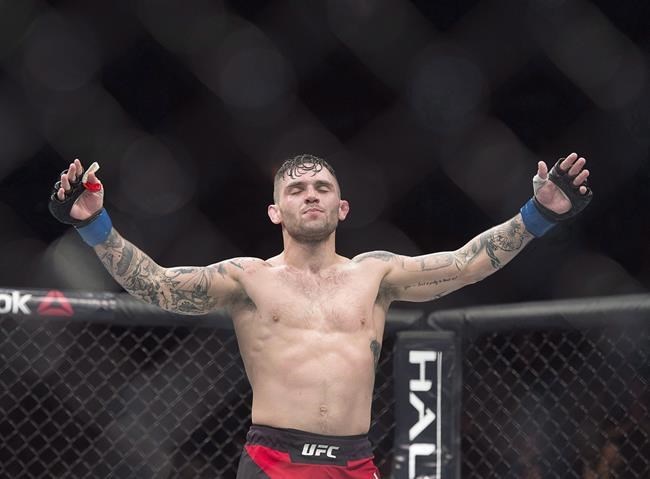 Canadian featherweight Gavin Tucker, in contrast, has spent the last year honing his skills in the wake of beating South Korean Seung Woo Choi at UFC 240 in July 2019 in Edmonton.

The different approaches will be tested Saturday when the two face off on a UFC Fight Night card in Las Vegas. The main event at the UFC's Apex production facility sees 35-year-old Derrick (The Black Beast) Lewis, ranked fourth among UFC heavyweight contenders, take on No. 10 Aleksei Oleinik, a 43-year-old Russian.

Tucker (11-1-0) was slated to fight Billy Quarantillo in April, only to have the card scrapped due to the global pandemic. But the 34-year-old believes he has used the time wisely since his last outing.

"I just took a little bit of time off to improve," said the native of Ship Cove, N.L. who fights out of Halifax. "Every time you see me, I bring something different in the cage ... I don't think anyone out there has outworked me — in the gym, through COVID, through everything. I'm ready."

Against Choi, a talented striker, Tucker showed his improved grappling. While not always successful — he landed five of 13 takedown attempts — Tucker blunted Choi's weapons while building a 37-23 edge in significant strikes.

The fight ended via rear-naked choke at 3:17 of the third round.

The Choi win was especially sweet coming after a 22-month absence following a lopsided loss to Rick (The Gladiator) Glenn at UFC 215, also in Edmonton. Tucker showed his toughness, enduring a beating that was painful to watch in the later rounds.

Glenn held a 142-23 edge in significant strikes, outlanding him 84-2 in the final round. The American also converted four of seven takedown attempts while Tucker was 0-for-4.

Many observers, including Glenn, thought the fight should have been stopped.

"I don't like to hurt people," Glenn said after the bout. "We're in the hurting business but there's a little unnecessary damage he took."

Tucker, however, absolved referee Kyle Cardinal of any blame.

"Stop blaming the ref for a bad call," he said in a social media post after the fight. "That man let me go out on my shield. He visited while I was in the hospital and apologized. Was him and I in that cage. I didn't stop fighting. He saw that. He should sleep easy."

Tucker was left with four broken facial bones after the 30-25, 30-24, 29-27 beatdown. The good news was they were non-displaced fractures.

Today Tucker sees the Glenn loss as a positive.

"To be completely honest, that Rick Glenn fight was a huge turning point. It taught me a lot so I have Rick to thank for that," said Tucker, who won his first UFC fight in February 2017 when he decisioned Sam Sicilia in Halifax.

"And then I got to go out and use this and turn things into something people didn't expect from me. So I'm looking to do the same thing every time I fight."

After the Glenn defeat, Tucker returned to the gym the next week despite the fact his injuries limited his training.

"It's just my lifestyle," he explained. "I'm not just a fighter, I'm a martial artist. I live this day-in day-out."

He spent time training in Montreal at the famed Tristar Gym as well as a trip to Amsterdam to work on his kickboxing.

Jaynes (16-4-0) has had time to prepare for Tucker, a luxury he didn't have for his UFC debut against lightweight Frank (The Crank) Camacho. He got the call to fight on a Wednesday, ahead of a Friday weigh-in, and had to lose 16 pounds in 20 hours.

The 30-year-old Jaynes, who earned a US$50,000 performance bonus for the Camacho win, has spent his preparation time getting to know Tucker.

"Gavin's become my best friend," he told The Scrap podcast. "I stalk him. I stalk his social media."

After facing a pair of six-footers, the five-foot-seven Tucker gets to face someone his own height in the 5-8 Jaynes. Tucker gave up 8 1/2 inches in reach against Choi.

It's Tucker's first fight in Las Vegas although he has trained there on numerous occasions.

This report by The Canadian Press was first published Aug. 6, 2020.

Titans have NFL's 1st COVID-19 outbreak; next game still on
Sep 29, 2020 6:25 PM
Comments
We welcome your feedback and encourage you to share your thoughts. We ask that you be respectful of others and their points of view, refrain from personal attacks and stay on topic. To learn about our commenting policies and how we moderate, please read our Community Guidelines.