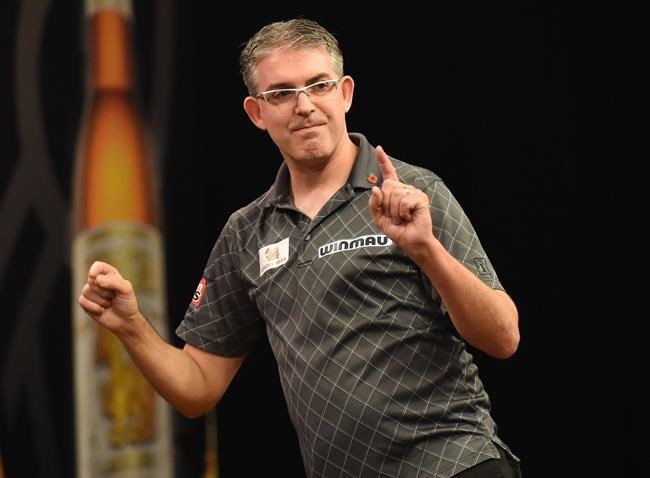 After winning his way back onto the pro darts tour, Canadian Jeff (The Silencer) Smith reached the final of the first event he competed in.

But the COVID-19 outbreak has put a halt to pro darts, like other sports, and the 44-year-old finds himself in self-isolation at home in Hampton, N.B., after returning from Europe.

"It's been quite a hectic year, getting to see lots of places around the world and the darts have been going great," Smith said cheerfully. "I'm pretty excited to be back playing again."

Smith, 44, is the only Canadian currently on the Professional Darts Corporation circuit, after winning his tour card back in January. Dawson Murschell's tour status ended at the end of 2019 and the 24-year-old from Medicine Hat, Alta., has opted to remain in Canada this year and focus on the North American scene.

Smith won his way back onto the circuit in mid-January at the PDC Qualifying School in Wigan, England, after landing a 110 checkout in the deciding leg of his 5-4 playoff win over Japan's Seigo Asada.

In February, he made it to the final in his first event before losing 8-4 to former world champion Gary Anderson at the Players Championship 1.

"Great first day on the new job,'' Smith tweeted at the time.

He left Europe in the wake of PDC tournament cancellations and warnings that Canadians needed to return home. On his way back from Barnsley to London, he marvelled at how empty King's Cross railway station was.

"One of the busiest train stations in the world and there might have been 10 people in there," he said.

Once he made it back to his wife and two daughters (aged 13 and 15), he tweeted "It's good to be home" alongside a photo of a Tim Hortons cup.

A proud Canadian, Smith has used "New Orleans is Sinking" by the Tragically Hip as his walkout music on tour, although he says he has been having some copyright issues with the song. Bryan Adams' "Summer of 69" may be his next anthem.

While in home lockdown, Smith has been practising in a bid to retain his current run of good form.

Just making it out of Q-School was an accomplishment. Like golf, there are plenty of accomplished darts players looking to get on the pro circuit.

"I played it back in 2011-12 and I think there were 128 players at that time and it was incredibly hard then," he said. "Now you're pushing numbers closer to 900 between Europe and the U.K. It's a flip of a coin. You need a bit of luck but you also have to play some spectacular darts or you're not going to get through."

The prize money is one of the lures. Prize money on the PDC circuit last year totalled 14 million pounds ($23.6 million) with 500,000 pounds ($841,765) of that going to the winner of the showcase PDC World Darts Championship.

"The top 10 players in the world are very very well off ... It's incredibly difficult but the rewards are there," said Smith.

Smith, who was 14 when he started as a youth player with the National Darts Federation of Canada, has enjoyed his own success. He made it to the final of the 2016 BDO World Championship where he lost to Scott Waites.

While he loves his sport, the time away from home is unwelcome. In the past, he has made short trips, often staying with friends, to restrict the time away.

Smith works for a friend at Hatfield Auto Body & Glass in nearby Saint John when he is not on the darts circuit. He used to have his own body shop — a three-minute walk from home — but it was destroyed in a fire last August.

"I definitely had to make some adjustments to my lifestyle," he said.

Other Canadians like Jim Long, a GM worker from London, Ont., have taken part in the world championships recently. Smith says there is plenty of darts talent in Canada, with lack of experience sometimes a drawback.

Smith has passed his knowledge on to colleagues like Long, just as he used to consult former world champion John Part of Oshawa, Ont.

He reckons 20 per cent of the dart game is technique with the rest mental.

"If you don't think you can win in that room, you definitely aren't going to. If you're going to succeed, you have to be mentally strong between the ears."

He is looking forward to a return to action.

"As soon as the restrictions are lifted, then it's back on an airplane and straight back to the business end of things."

This report by The Canadian Press was first published March 25, 2020.

Harper, Matz latest MLBers to contribute to virus relief
Apr 3, 2020 5:07 PM
Comments
We welcome your feedback and encourage you to share your thoughts on this story. We ask that you be respectful of others and their points of view, refrain from personal attacks and stay on topic. To learn about our commenting policies and how we moderate, please read our Community Guidelines.