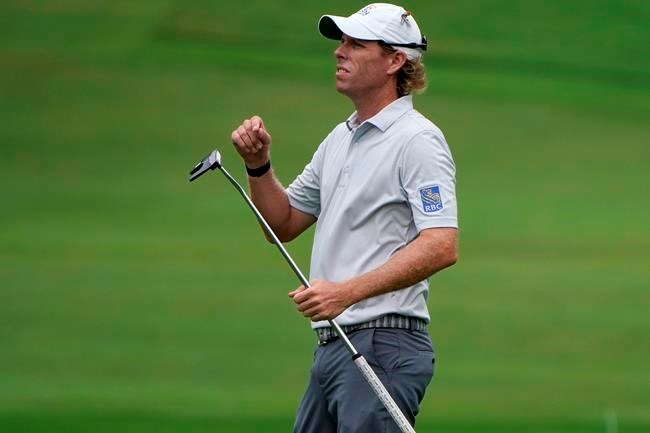 David Hearn, like everyone, has been deeply effected by the COVID-19 pandemic.

Hearn, from Burlington, Ont., is on the PGA Tour's players committee and had to review the pro golf circuit's return-to-play plan in the spring. When he returned to competitive play he admits that he was distracted by the global health crisis and it affected his focus on the course.

"I was struggling, just like everybody, just sort of socially, the emotional effects of everything that was going on," said Hearn on Thursday from Southampton, Bermuda. "It just wasn't the best for me.

"Some guys played well through the summer, and that's fine. Everyone dealt with things differently."

Hearn finished 99th in the FedExCup rankings in the 2020 season. Most of his success, however, came in the fall swing of the season, including an eighth place finish at the Bermuda Championship on Nov. 3.

From February to the end of July, he missed the cut at eight consecutive cuts, finally seeing the third round at the Barracuda Championship where he tied for 48th on Aug. 2.

"We got through the hardest part of it, I think," said Hearn, who added that he and his wife had to have difficult conversations with their three young children and also come up with ways to keep their elderly parents safe.

"Hopefully, the world's going to be moving in the right direction soon and we'll put this behind us."

The 41-year-old Canadian feels like he's back in the swing of things to start the 2021 season. He tied for 14th at the Safeway Open on Sept. 13 and tied for 33rd two weeks later at the Corales Puntacana Resort & Club Championship before missing the cut at the Sanderson Farms Championship.

"My goals this year are to see more consistency in my game and try to keep my game at a high level more often," said Hearn.

On Thursday, Hearn shot a 3-under 68 to finish the first round of the Bermuda Championship tied with Michael Gligic of Burlington, Ont.

Roger Sloan of Merritt, B.C., was a shot ahead of them, while Graham De Laet of Weyburn, Sask., was 3-over par on the day.

This report by The Canadian Press was first published Oct. 29, 2020.

EE Football Team raises almost one million dollars for Joey Moss Memorial Fund
Nov 22, 2020 10:06 PM
Report: Aron Baynes signs with Raptors, Gasol signs with Lakers, Boucher re-signs
Nov 22, 2020 10:04 PM
Molino, Minnesota United beat Rapids for first playoff win
Nov 22, 2020 8:48 PM
Comments
We welcome your feedback and encourage you to share your thoughts. We ask that you be respectful of others and their points of view, refrain from personal attacks and stay on topic. To learn about our commenting policies and how we moderate, please read our Community Guidelines.