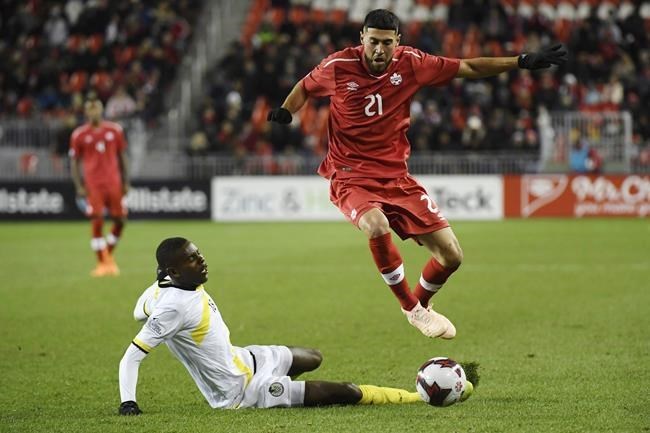 A pair of comfortable 4-1 victories over No. 162 Barbados has given Canada confidence but done little to move the needle when it comes to the FIFA rankings. Canada remains in El Salvador's rear-view mirror in the race for position in CONCACAF World Cup qualifying.

The 73rd-ranked Canadian men hope to further top up their FIFA rankings point total Wednesday when they face No. 39 Iceland in an international friendly in Irvine, Calif.

Iceland, coincidentally, takes on No. 69 El Salvador on Sunday. But that meeting, apparently at the request of El Salvador, has been designated as a training match so there will not be any ranking points at stake.

The top six CONCACAF teams after the June international window will qualify for the Hex, the most direct route of World Cup qualifying out of the region that covers North and Central America and the Caribbean. The top three finishers in the Hex round qualify for Qatar 2022.

Canada started the year with 1,331.2 points in seventh spot in CONCACAF, 15 points behind sixth-place El Salvador. Canada's total after the Barbados wins is 1,333.456370, according to the Canadian Soccer Association.

Canada Soccer estimates a win over Iceland on Wednesday would be worth another 3.1 points for Canada.

Failure to make the Hex means a more convoluted qualifying schedule for teams ranked seventh through 35th in the confederation. The last team standing will meet the fourth-place Hex finisher to determine who represents CONCACAF in an intercontinental playoff for a berth in the World Cup.

The CSA is loading up Canada's schedule in a search for points. John Herdman's team will look to play as often as it can in March and June international windows.

The three games in January are worth fewer ranking points since they fall outside a FIFA international window. Club teams do not have to release their players outside those windows so Canada and Iceland will both be missing top talent Wednesday.

Herdman, a glass-half-full-type of coach, sees positives in his team's quest.

"When we get to October this year, one way or the other we're going to be playing in World Cup qualification,'' he said in an interview earlier this month.

"It was always going to be a challenge to qualify for the Hex,'' he said. "The World Cup dream is still alive because we do have another opportunity if we don't make the Hex.''

Toronto FC midfielder Jonathan Osorio, who captained Canada for the first time in Friday's win over Barbados, expects a tougher night against Iceland.

"This is a team that has been to the last World Cup, been to the last Euro (Championship) and made pushes at those tournaments," he told a media conference call Tuesday. "A team with a lot of confidence, that has an identity that has worked for them in the last few years.

"It's going to be a great test for us, a really good test for us. At the same time, I think this game means a little bit more to us because of the way the ranking system works and qualifying to the World Cup works. We're definitely going to have to bring a really good intensity for this game."

Sheahan's four points and McDavid's two goals powers Oilers past Coyotes 7-3
Jan 18, 2020 4:40 PM
Comments
We welcome your feedback and encourage you to share your thoughts on this story. We ask that you be respectful of others and their points of view, refrain from personal attacks and stay on topic. To learn about our commenting policies and how we moderate, please read our Community Guidelines.