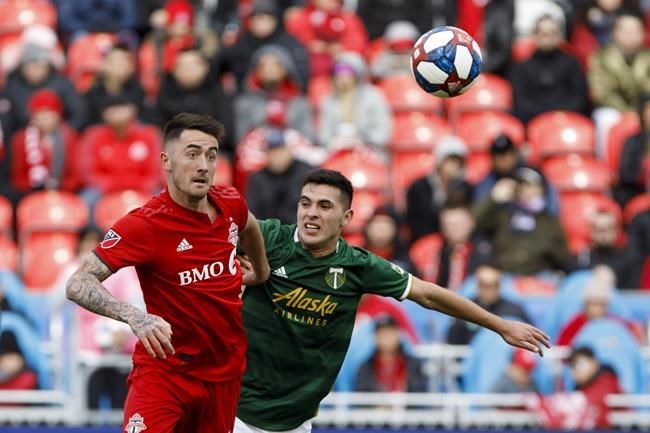 Midfielder Jay Chapman is among familiar faces with Canada in camp in California.

But a new MLS adventure looms for the 26-year-old with expansion Inter Miami CF after five seasons playing in his hometown with Toronto FC.

While Chapman is looking forward to a new start with a brand-new club, he admits the move away is a "little bittersweet."

"I grew up in Toronto. That's my home. That's always going to be my home," he said. "I've had the best moments of my career in Toronto and I've got so much love for so many people at that club. Some of my best friends, probably my life-long friends are going to come from that team."

At his best, Chapman can deliver a silky pass and has good vision.

While Chapman made 17 appearances with Toronto last season, only five were starts and his regular-season playing time totalled 522 minutes.

He said he had known for some time that a move was possible.

"When I had my opportunities with Toronto, I think that I did well," he said. "And I think at times I didn't get enough playing time for some of the performances that I put in. It was kind of frustrating for me at certain times up there.

"But Toronto's such a great city. It was one of the toughest midfields in the entire league to break into. I think I was patient but at times I think I deserved a little bit more of an opportunity."

Then he heard there was interest in Miami.

"I had been there for five years," he said of Toronto. "I just thought I needed something new, kind of step out of my comfort zone in my home city. Miami sounded like they really wanted me and it sounded like an opportunity for me to get away and grow and take a different step in my career."

Toronto sent Chapman to Miami on Nov. 13 for US$100,000 in general allocation money with Miami sporting director Paul McDonough calling the Canadian "a versatile attacking midfielder with good experience in the league and at the international levels."

Chapman is currently adding to that international experience.

He hit the woodwork twice in his third senior appearance and was involved in the buildup to three of the Canadian goals in a 4-1 win over Barbados in Irvine, Calif, on Tuesday.

He did not see action Friday as 73rd-ranked Canada beat No. 162 Barbados by the same score  in a rematch at the same venue.

"Our first game back (in 2020), I think we could have scored a little bit more," he said of Tuesday's win. "But it was a good game overall and a good way to start this camp."

Canada is looking to collect FIFA ranking points in its bid to crack the top six in CONCACAF ahead of the June ratings. The top six in the region at that point will make the Hex, the easiest World Cup qualifying route out of the region.

The 17-year old Nelson, meanwhile, was the third-youngest male player to debut for Canada.

Chapman began his youth career in the TFC academy before attending Michigan State University where was named a First Team All-American and Big Ten Midfielder of the Year in 2014. In 2015 he signed a homegrown contract with Toronto.

In all, Chapman made 88 appearances for Toronto with six goals and five assists.

He's impressed by what he has seen of the people behind the new franchise so far.

"They know how to make a winning team. I'm really excited to be part of that project," said Chapman, who has already found a place to live in Florida. "It's going to be a big market, big players, a lot of hype around the team and a lot of expectations to win, which is a very exciting thing for a player.

"It's going to be a new start for me and I can't wait to get down there and get pre-season started."

He has yet to meet Miami co-owner David Beckham, a question he has been asked more than a few times already.

"I don't mind getting asked that. It's kind of a cool question to be asked," he said with a laugh.

"He was actually one of my favourite players growing up," Chapman added. "It's kind of surreal that I get to play for a team that he's kind of running."

This report by The Canadian Press was first published Jan. 10, 2020.