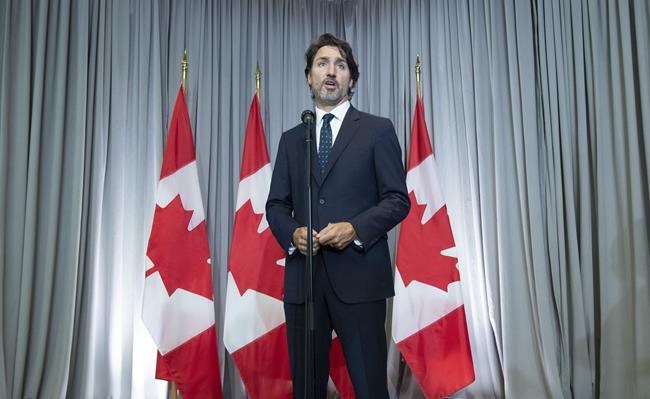 OTTAWA — Prime Minister Justin Trudeau says Canada's democratic institutions — including Parliament and Elections Canada — need to be fully functional even in the midst of a deadly pandemic.

But he insists that doesn't mean he wants an election this fall.

"I do not want an election. I don't think Canadians want an election," Trudeau told a news conference Wednesday as he wrapped up two-and-a-half days of cabinet meetings.

"I think Canadians want politicians to work together to serve them, to build a better future for them and keep them safe during this (COVID-19) crisis."

Parliament returns Sept. 23 with a throne speech that Trudeau promised will set out a path for getting Canadians through — and eventually beyond — the pandemic. The speech will be put to a confidence vote, which could theoretically bring down Trudeau's minority Liberal government.

Trudeau briefly seemed to fuel election speculation, declining to say it would be reckless for opposition parties to plunge the country into an election at a time when COVID-19 cases are on the rise across the country and public health experts are warning of a potential second deadly wave.

"I think it's a little irresponsible to be talking about recklessness when it comes to elections. I think I should and we all should have tremendous confidence in Elections Canada to be able to bring forward strong measures to keep us safe and allow for the expression of the democratic will of the people," he said, noting that New Brunswick safely held an election on Monday.

He added that "if there has to be an election, we'll figure it out.,"

But he bristled when it was suggested that sounds like he'd welcome an election.

When Trudeau announced last month he was proroguing Parliament, he spoke of returning with a throne speech that would lay out a bold, audacious plan to rebuild the shattered economy.

But talk of bold action gave way throughout the cabinet retreat as ministers emphasized the government's almost exclusive focus on protecting Canadians' lives and incomes as the pandemic continues to rage.

For his part, Trudeau said Canadians "deserve an ambitious plan for a healthier and safer Canada, a Canada that's fair and inclusive, a Canada that's clean and competitive and, with the speech from the throne on Sept. 23, that's exactly what our government is ready to do."

Promoting green jobs and clean technologies will be "an essential part of building back better," he added.

Still, he stressed: "At the same time, we have to remember we are not out of this pandemic yet" and said dealing with it remains "job one."

With Conservative Leader Erin O'Toole, Bloc Quebecois Leader Yves-Francois Blanchet and most of the Bloc caucus in self-isolation due to exposure to individuals who've tested positive for COVID-19, Trudeau said it's imperative that Parliament return in a hybrid format — with only a small number of MPs physically present in the House of Commons and the rest participating virtually, including voting electronically.

The Conservatives have balked at the idea of electronic voting but the government needs only one opposition party to support the idea. The NDP and Bloc appear to be supportive of the government's approach to the resumption of Parliament

"We're going to move forward with a form of distance voting that will allow every parliamentarian to make sure that their community is heard … (and) ensuring that our democracy continues to be fully functional in a way that doesn't put MPs, their families or their communities at risk," Trudeau said.

For the opening couple of days, government House leader Pablo Rodriguez said he's hopeful he can come to an informal agreement among the parties to limit the number of MPs in the chamber until they can vote on the proposed hybrid model.

Trudeau released details Wednesday of how provinces and territories will spend the $19 billion the federal government is giving them to safely restart the economy. The details were in letters each premier has sent outlining how they intend to spend the money.

Among other things, the funding will help increase testing and contact tracing, support the health-care system, help municipalities deliver essential services like public transit and ensure a secure supply of personal protective equipment for front-line workers.

The money will also go toward increasing safe child-care spaces and income support for workers without paid sick leave.