The blockade stays put and Teck withdraws; In The News for Feb. 24 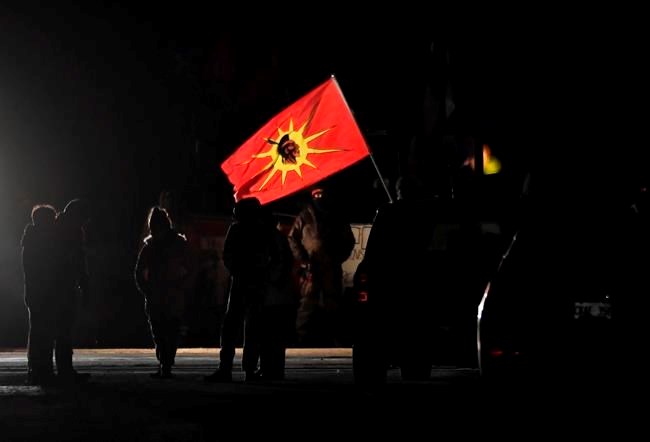 In The News is a roundup of stories from The Canadian Press designed to kickstart your day. Here is what's on the radar of our editors for the morning of Feb. 24.

What we are watching in Canada ...

But the deadline came and went, and the blockade near Belleville, Ont., that has crippled both freight and passenger rail traffic in most of eastern Canada for nearly three weeks remained in place Monday morning.

The barricades are a response to a move by the RCMP to clear protesters who had been blocking access to a pipeline worksite on Wet'suwet'en territory in northern British Columbia.

Hereditary chiefs of the Wet'suwet'en Nation oppose the work on their traditional territory, despite support from elected band councils along the pipeline route.

On Friday, Prime Minister Justin Trudeau said it was time for the barricades to come down and injunctions ordering the tracks cleared to be enforced.

But Heredity Chief Na'moks, also known as John Ridsdale, said Sunday that Trudeau's "misinformed" and "antagonistic" speech had just the opposite effect.

"If the prime minister had not made that speech the Mohawks would have taken down everything," he said. "They were ready. We were on the phone."

Teck Resources Ltd. says it's withdrawing its application for a massive oilsands mining project just days ahead of an expected government decision, citing the political discourse over climate change.

The company says it will take a $1.13-billion writedown on the Frontier project in Alberta.

In a letter to the federal environment minister, Teck CEO and President Don Lindsay says investors and customers increasingly want jurisdictions to have a framework in place that reconciles resource development and climate change.

He says that "does not yet exist here today," and that the growing debate around the issue has placed Frontier and the company "squarely at the nexus of much broader issues that need to be resolved."

The proposed $20.6-billion project was expected to create an estimated 7,000 construction jobs, 2,500 operating jobs and about $12 billion in federal income and capital taxes, but was also expected to produce about four million tonnes of greenhouse gas emissions per year over 40 years.

Fourteen First Nations and Metis communities signed participation agreements with the company on the Teck mine, and the project was awaiting approval from Prime Minister Justin Trudeau's government.

They say a woman arrived in Canada from China on Friday and went to a Toronto hospital with an intermittent cough.

The province says the woman was tested for the new virus, known as COVID-19, and was sent home for self isolation because her illness was mild.

Officials say the woman's local tests came back positive for the virus on Saturday and the sample has been sent to the National Microbiology Lab in Winnipeg for confirmation.

The province says it's unlikely that the woman was infectious.

It says she "followed all protocols and wore a mask throughout her travels back to Toronto."

This is the only known case of the disease in Ontario, after three people with previous diagnoses were cleared of the virus.

CHARLESTON, S.C. — Any momentum that Democratic presidential candidate Bernie Sanders gains in South Carolina after his win in Nevada could be devastating to Joe Biden.

The former is looking to the state for a commanding victory that can keep his candidacy alive through Super Tuesday.

The March 3 contests will unfold in 14 states and award one-third of the delegates needed for the Democratic nomination.

Moderate Democrats are growing increasingly nervous that Sanders' call for a political “revolution” will drive voters away from the party, both in the matchup against President Donald Trump and in House and Senate races.

What we are watching in the rest of the world ...

SEOUL — South Korea reported another large jump in new virus cases Monday a day after the president called for “unprecedented, powerful” steps to combat the outbreak that is increasingly confounding attempts to stop the spread.

China also reported 409 new cases on Monday, raising the mainland's total to 77,150 after a zigzag pattern of increases in recent days.

The 150 new deaths from the COVID-19 illness raised China's total to 2,592 and showed a spike after hovering around 100 for four days. All but one death were in Hubei province, where the outbreak emerged in December.

Significant jumps in cases outside China have raised concern of the outbreak getting out of control. South Korea has the third-highest national total behind China and Japan, and cases have rapidly increased in Italy and Iran in just a few days.

Most of Japan's cases were from the Diamond Princess cruise ship, where nearly one-fifth of its 3,711 passengers and crew became infected.

More than 140 of South Korea's new cases were in and near Daegu, the city of 2.5 million people where most of the country’s infections have occurred.

This report by The Canadian Press was first published on Feb. 24, 2020.