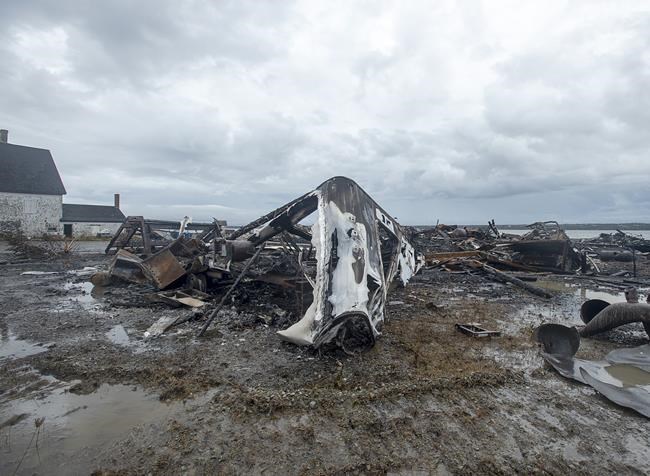 A federal promise of more police resources to contain escalating violence in southwestern Nova Scotia fishing communities met with scant approval Saturday, with one First Nations leader calling for military support in the wake of a suspicious fire.

Federal opposition leaders, meanwhile, said the blaze that gutted the lobster pound in Middle West Pubnico, N.S., was the result of past government inaction.

Charred debris from the burnt out fish plant lay scattered along the shore, the lobster catch of Mi’kmaq fishers destroyed.

It's the latest battleground in an escalating crisis over Indigenous fishing treaty rights.

No one was inside the building at the time, though police said a man believed to be a person of interest in the suspicious fire was sent to hospital with life-threatening injuries.

The incident prompted statements of solidarity from various federal cabinet ministers and a pledge to deploy more RCMP officers to the area.

But Chief Mike Sack of the Sipekne'katik First Nation said the army is needed to prevent commercial fishermen from "taking the law into their own hands."

"They're doing whatever they want and getting away with it," he said in an interview. "We need the military to come step in to keep the peace."

The fire erupted hours after police arrested and charged a man in relation to an assault against Sack in New Edinburgh, N.S., earlier this week.

"This was retaliation," Sack said. "We're being targeted now. These are hate crimes."

The blaze capped a week of violence that included two other clashes involving hundreds of people outside lobster pounds that store Indigenous-caught lobster.

Public Safety Minister Bill Blair said he has approved a request by Nova Scotia's Attorney General to step up the RCMP presence in the region in an effort to keep the peace.

"The recent acts of violence in Nova Scotia are unacceptable and I strongly condemn them," he said in a statement.

"The current tensions cannot continue," Blair added. "The temperature of this dispute must be lowered, now. The threats, violence, and intimidation have to stop."

The move fell short for two of the federal opposition leaders.

Conservative Leader Erin O’Toole said the government is not doing enough to ensure public safety and find a peaceful resolution to the fisheries crisis.

"His government’s dismal handling of this situation and his lack of leadership are undoing decades of relationship building ... and putting lives and livelihoods at risk," O'Toole said in a statement.

"The Mi'kmaq people desperately need help now," he said on Twitter. "This must be stopped."

Both Fisheries Minister Bernadette Jordan and Crown-Indigenous Relations Minister Carolyn Bennett said they spoke with the chief on Saturday to express support for the community and Indigenous treaty rights.

"We share the urgent priority for the safety of his community," Bennett said on Twitter. "Canadians are appalled at this assault on the Mi’kmaq people."

Jonathan LeBlanc, fire chief for Eel Brook District Fire Department, said his team got a call around midnight about a blaze at a large commercial structure in West Pubnico.

He described the plant as "a lost cause," but said crews were able to prevent damage to adjacent buildings.

"There was no hope of saving it," LeBlanc said of the building, noting it was engulfed in flames when fire crews arrived and the wind was stoking the embers.

"The power lines to the building were arcing out quite severely. That made it very difficult for us to get close to extinguish it."

LeBlanc said it's still too early to identify the cause of the blaze, but the fire marshal's office is investigating.

Non-Indigenous protesters oppose the band's decision to start a commercial lobster fishing business that has operated outside the federally regulated lobster season since mid-September.

But Sack argues Indigenous people in Atlantic Canada and Quebec have a treaty right to fish for a moderate livelihood -- a right upheld by the Supreme Court of Canada.

Many non-Indigenous critics, however, cite a clarification issued by court, stating the Mi'kmaq treaty rights would be subject to federal regulations to ensure fish conservation.

Yet Sack argued fishing seasons are based on the economy and trade, and the small Indigenous fishery doesn't impact conservation.

"The commercial fishermen are just not wanting to make less money," he said. "They’re afraid to share an asset."

On Twitter Saturday, Assembly of First Nations National Chief Perry Bellegarde said he's reached out to the RCMP and the federal government to express First Nations’ "deep concern" over the fire.

"I demand a full and thorough investigation by the proper authorities," Bellegarde said.

A group of six Nova Scotia senators, meanwhile, condemned what they described as escalating violence against Mi’kmaq fishers. Their remarks came in a statement released just hours before the Middle West Pubnico blaze broke out.

“Regardless of whatever concerns individuals or groups may have, there can be no justification for the vigilantism and blatant racism that is now being witnessed,” the statement said.

“We urge everyone involved to remain calm and peaceful and let the discussions currently underway proceed without any further violent acts, racial insults or threats of any kind.”

The senators said the Mounties must “rapidly and effectively uphold their responsibility to restore peace and order.”

This report by The Canadian Press was first published Oct. 17, 2020.