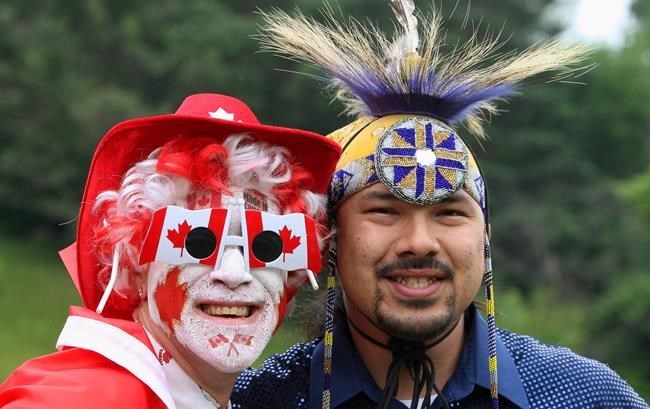 Housty lives in the coastal B.C. town of Bella Bella where the Heiltsuk Nation is known for its efforts to help conserve and protect the Great Bear Rainforest.

"I can recall a lot of celebrations here, we're a community that loves to come together and celebrate things but Canada Day is not one of those things I remember bringing the community together," she said in an interview.

Canada Day comes this year as Indigenous Peoples absorb reports of confrontations between the police and Aboriginal people, as well as accusations of systemic racism in British Columbia's health-care system.

Mary Ellen Turpel-Lafond, the director of the University of British Columbia's Residential School History and Dialogue Centre, has been appointed by the provincial government to investigate accusations that some B.C. emergency room staff played a game to guess the blood-alcohol levels of Indigenous patients.

She said Celebrations like Canada Day, Victoria Day and St-Jean-Baptiste Day are symbols of colonialism.

Canada Day also comes after recent anti-pipeline protests by First Nations and the Black Lives Matter movement, which adds to the complexity of the national celebration, she said.

"This is a Canada Day like no other Canada Day for some time," said Turpel-Lafond, who is also a law professor at the university.

"Are we the just, rights-respecting society we think we are and we need to be?"

A recent poll of 1,000 people commissioned by Historica Canada found that Canadians have a lot to learn about the historical and cultural contributions of Indigenous Peoples and other Black, Asian and minority ethnic Canadians.

Fewer than six per cent recognized figures such as Indigenous filmmakers and human rights activists, or the first RCMP officer to wear a turban.

Byron Louis, the chief of the Okanagan Indian Band, says he can't remember the last time Canada Day was formally celebrated in his community.

"It's a stat holiday so we'll take it, other than that there is no celebration in our community," he said. "What exactly is there to celebrate?"

Louis said there has been an erosion of the relationship between the Canadian government and Indigenous Peoples, which makes it difficult to join in the celebration.

Wade Grant, an intergovernmental officer with the Musqueam Indian Band, said he would like to see a greater emphasis placed on days that honour Indigenous Peoples.

"We have Canada Day parades, we have Canada Day celebrations downtown. On National Indigenous Day we don't have cities or municipalities holding parades or holding events where concerts are played to celebrate Indigenous people," he said in an interview.

Grant said he understands the aspirational aspect of Canada Day, but as someone of mixed heritage whose grandfather was forced to pay the Chinese head tax, he would like to see more discussion of what other races have experienced in Canada.

Chief Judith Wilson of the Neskonlith Indian Band said she views Canada Day as a chance to better educate others, explaining how she helped organize a skit depicting the writing of a letter in 1910 from Indigenous chiefs to Canada's seventh prime minister, Sir Wilfrid Laurier.

The scene recreated the chiefs of the Secwepemc, Syilx and Nlaka'pamux peoples relaying grievances over their treatment by the federal government. Wilson presented the scene during Canada Day celebrations in Chase, B.C., to show the public the issues Indigenous people have faced.

Housty said she would also like to see a greater recognition of what Indigenous communities are facing.

"I don't think we can say everyone in Canada has grappled with the reality of what systemic racism is in this country," she said. "The fact that it isn't historical, it's something that is alive and present and a lived reality for people around us."

This report was first published by the Canadian Press on June 30, 2020.

Note to readers: This is a corrected version of an earlier story. It fixes the spelling of Sir Wilfrid Laurier's first name.

Grocers defend pandemic pay cut decisions as independently made despite emails, calls
Jul 10, 2020 4:50 PM
Comments
We welcome your feedback and encourage you to share your thoughts. We ask that you be respectful of others and their points of view, refrain from personal attacks and stay on topic. To learn about our commenting policies and how we moderate, please read our Community Guidelines.