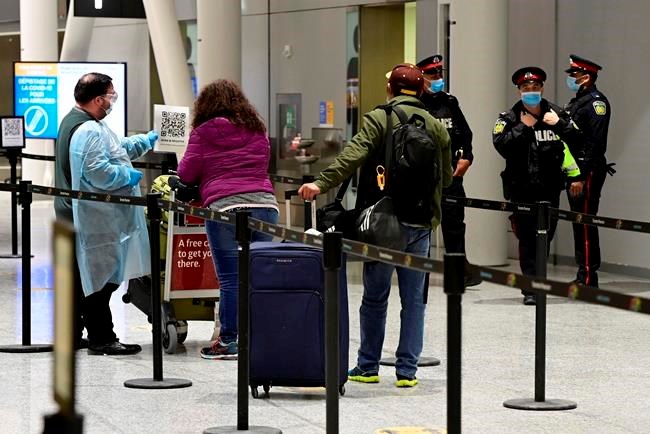 It came after Ottawa started making all international air travellers show proof of negative COVID-19 tests before boarding their planes.

Since Feb. 22, international air travellers also must quarantine in specified hotels for three days after landing, pending the results of second COVID-19 tests.

"That’s a very strong disincentive for people to fly," said John Gradek, an aviation expert and McGill University lecturer. "They scared everybody with a $2,000 bill for those three days."

The government began musing about the quarantines in January but didn't confirm the details until Feb. 12. CBSA data doesn't yet reflect what impact that may have had.

Reports of 10-hour phone waits to book rooms and overcrowded hotels with delayed meal service have only added to the disincentive since the quarantine rule took effect Feb. 22.

"It appears that it's just running totally out of control," said Marty Firestone, president of Travel Secure, a Toronto-based company that specializes in travel insurance.

"The whole thing is not only a logistical nightmare, but it's turning into just, well, a nightmare."

He said the quarantine is pushing snowbirds to delay their return or to make plans to fly to a border city such as Buffalo, N.Y., and cross into Canada by land — typically via car rental — to avoid being holed up in a hotel. The quarantine applies only to air travellers.

Conservative health critic Michelle Rempel Garner called on the federal government to scrap the hotel quarantine program and replace it with a system of enhanced pre- and post-arrival testing.

She cited "deplorable and unsafe conditions" that range from "horrifying reports of sexual assault" to dietary restrictions going unmet.

On Monday, members of the House of Commons’ public safety committee voted to study the security of the federally approved facilities and at-home compliance checks following several incidents, including an alleged assault at a quarantine hotel in Montreal last month.

Rempel Garner also slammed a "haphazard patchwork of exemptions" and noted that officials at the Public Health Agency of Canada could not immediately point to data showing the effectiveness of hotel quarantines over self-isolation at home when they were asked in committee on Feb. 19.

By the end of March they started barring most non-citizens or permanent residents from travelling here for purposes that aren't considered essential — such as helping with the pandemic or truck drivers bringing in supplies.

While air travel did start to tick up in the summer, and rose even further in December, overall it has consistently remained less than 10 per cent of what it was in previous years.

There was a small increase after Christmas, with almost 170,000 people arriving in Canada by air between Dec. 28 and Jan. 10.

— With files from Christopher Reynolds