In battleground Pennsylvania, Trump supporters are still all in for their president 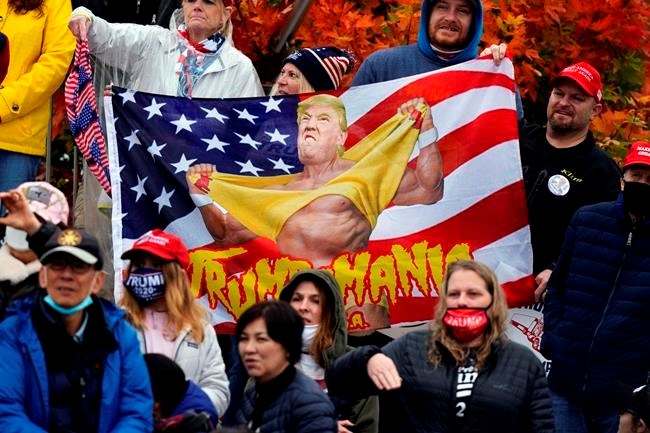 YOUNGSTOWN, Pa. — Along a scenic stretch of historic Lincoln Highway, a meandering two-lane strip of east-west pavement that runs through southern Pennsylvania, partisan devotion to Donald Trump is on full display.

The Make America Great Again brand outnumbers Joe Biden signs by more than 10 to one — everything from simple lawn signs and hand-lettered placards to makeshift Halloween decorations and even a lovingly decorated semi-trailer.

On one small-town balcony, a lime-green likeness of the Incredible Hulk angrily brandishes a billboard with the words, "Breathe Free — No Masks."

For supporters of the president, it's an asphalt rainbow that leads to a pot of Trump gold: a two-storey house decorated from gutters to ground in the colours of the American flag, complete with a towering likeness of the commander-in-chief.

Despite a persistent drizzle, dozens of admirers started lining up well before 11 a.m. on Wednesday, erupting in cheers as "Trump House" owner and proprietor Leslie Rossi and her daughter arrived to open the front door.

They left loaded down with Trump swag: lawn signs, flags, bumper stickers, T-shirts and hats, all of it free to visitors in exchange for nothing more than a signature in the guest book.

"It's pouring down rain, and we still have a crowd," Rossi said, as helping hand Barry Kinsey doled out doughnuts and cookies to arriving visitors.

Trump House has no affiliations with the campaign, she added.

It's a striking reminder that while polls consistently give the edge to the Democrat nominee, Trump still enjoys a substantial and passionate core of support — particularly in a state sure to play a starring role on and beyond election day.

With in-person polls opening Tuesday, Pennsylvania's blue-collar battlegrounds have emerged as a critical milestone on the road to the White House for both the Trump and Biden campaigns.

Along with so-called Rust Belt states Michigan and Wisconsin, the three states comprise 46 of the 270 Electoral College votes required to declare victory, 20 in Pennsylvania alone.

And they are a part of the country where Trump's arguably strongest flank — disdain for NAFTA and devotion to the working class — resonates the most.

Both candidates have spent much of the week criss-crossing the region, where state polls consistently suggest Biden enjoys a modest but not insurmountable lead, particularly in Pennsylvania.

The folks at Trump House aren't buying it.

"I think when this man started to run, he fell in love with America," said Judy Kirkwood, a retired Southwest Airlines employee who visited the house for the first time Wednesday.

"He probably didn't even know what was out there. It gets me emotional. I think he fell in love with America, and I think it taught him something very valuable."

Kathy Rumski, who works at Southwest as a customer service supervisor, gently ribbed her friend as she noticed she was close to breaking down while talking about Trump.

Pennsylvania is also the country's second-largest producer of natural gas, second only to Texas. Both women said they have friends in the industry who fear Biden, despite his strenuous denials, would ban fracking — an extraction method that environmentalists assail as a threat to air and water quality.

So far, nearly 80 million people have cast early ballots in the U.S., more than half the total number of votes tabulated in the entire 2016 election. As of Thursday, 2.1 million mail-in ballots had been returned, 1.4 million by registered Democrats.

And as the COVID-19 pandemic continues to fuel an unprecedented surge in early turnout, fears persist in Pennsylvania about how the battle of the ballots will play out.

Republicans have been challenging the state's electoral laws, hoping to limit how long after the election mail-in ballots can legally be counted. On Wednesday, the U.S. Supreme Court refused to block a three-day extension of the absentee-vote deadline.

And Trump himself, whose political fate rests on getting supporters to vote in person on Tuesday, has persisted with unfounded claims that mail-in ballots are rife with fraud.

"It's the fake ballots, right? The phoney ballots that are all crooked as hell," he said during a rally this week in Allentown, Penn.

"Just get out there and vote ... there's nothing like getting out and voting."

Those persistent efforts to sow doubt, coupled with the risk of delays in counting votes cast before Tuesday, have fuelled fears across the U.S. of unrest and uncertainty in the days following the election.

If it happens, the instigators will be Democrats, Kirkwood said — and the solution will be Trump.

"From what I've read, the people that are going to cause problems are ready. But I think Trump is ready too," she said.

"I think he knows exactly what he wants to do, what he's going to do, and I have 100 per cent faith in him that he can take care of this."

This report by The Canadian Press was first published Oct. 30, 2020.

Long-awaited federal rent subsidy program for businesses hurt by COVID-19 opens today
Nov 23, 2020 8:52 AM
Comments
We welcome your feedback and encourage you to share your thoughts. We ask that you be respectful of others and their points of view, refrain from personal attacks and stay on topic. To learn about our commenting policies and how we moderate, please read our Community Guidelines.