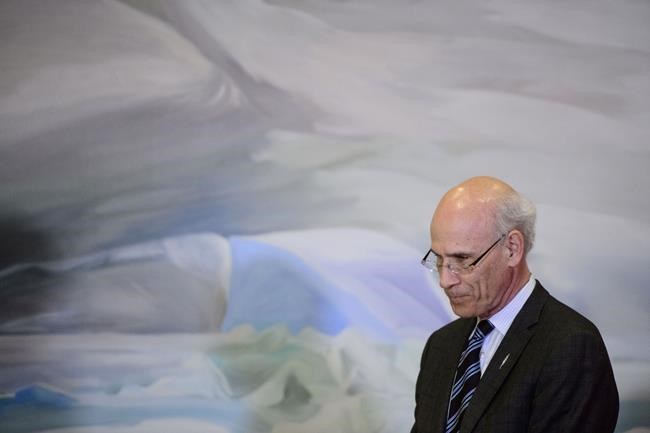 OTTAWA — The federal ethics commissioner says there is no reason to believe former Privy Council clerk Michael Wernick broke the conflict-of-interest law during the SNC-Lavalin affair.

In a report Tuesday, commissioner Mario Dion said he would therefore not undertake a full examination of the allegation and considers the matter closed.

In late September, Joe Friday, the public sector integrity commissioner, referred to Dion an accusation of conflict of interest against Wernick concerning his actions while he was the top public servant.

Such referrals require the ethics watchdog to take an initial look at the matter and issue a report.

An unidentified individual alleged to Friday that Wernick had inappropriately pressured Jody Wilson-Raybould, when she was justice minister and attorney general, to pursue negotiations with Montreal-based firm SNC-Lavalin towards an agreement that would avoid criminal prosecution for corruption and fraud.

SNC-Lavalin Group and two of its affiliates, SNC-Lavalin Construction and SNC-Lavalin International, faced charges of corruption of a foreign public official and fraud stemming from business dealings in Libya.

The company had unsuccessfully pressed the director of public prosecutions to negotiate a special settlement — known as a remediation agreement — out of concern the company could be barred from federal contracts for a decade if convicted of criminal charges.

After the Globe and Mail newspaper reported in February 2019 that prime ministerial aides leaned on Wilson-Raybould to ensure a remediation deal happened, she resigned from cabinet and was subsequently ousted from the Liberal caucus.

The Conflict of Interest Act prohibits public office holders — a category that includes federal ministers and senior officials such as Wernick — from using their position to influence a decision of another person.

During a December 2018 phone call, Wernick told Wilson-Raybould she was on a collision course with Prime Minister Justin Trudeau, who wanted to get a deal done. Wilson-Raybould said that if she intervened, it would be viewed as political interference, adding she wanted to protect the prime minister from such a perception.

In a report last August, Dion said Trudeau violated the Conflict of Interest Act by using his position of authority to exert influence over Wilson-Raybould, both directly and indirectly, in her decision on whether to intervene in the file.

As part of the Trudeau examination, Dion says, he interviewed several witnesses and received extensive documentary evidence from them. "I also had the opportunity to question Mr. Wernick in respect of his role in the matter."

Dion concluded that "the individuals who acted under the direction or authority of the Prime Minister in this matter … could not have influenced the Attorney General simply by virtue of their position."

As a result, Dion decided not to pursue additional examinations of these public office holders, including Wernick, "nor did I have reason to believe that they may have breached another substantive rule under the Act."

In response to the latest allegation, counsel for Wernick wrote to Dion that "his client did not seek to improperly further the private interests of SNC-Lavalin," the ethics commissioner's report says.

Ultimately, Dion found that "none of the information gathered indicated that Mr. Wernick may have contravened any of his obligations under the Act," the report says.

"I therefore did not have reason to believe that Mr. Wernick had contravened the Act and did not pursue the matter further."

In the end, there was no remediation agreement for SNC-Lavalin.

The company's construction division pleaded guilty in December to a charge of fraud over $5,000, will pay a $280-million penalty and will be subject to a three-year probation order.

The group Democracy Watch, meanwhile, recently launched a court challenge of Dion's ruling in the Trudeau examination, saying he should not have let everyone but the prime minister off the hook.

This report by The Canadian Press was first published March 10, 2020.

Technical glitches plague first electronic vote in House of Commons history
Sep 28, 2020 9:00 PM
Comments
We welcome your feedback and encourage you to share your thoughts. We ask that you be respectful of others and their points of view, refrain from personal attacks and stay on topic. To learn about our commenting policies and how we moderate, please read our Community Guidelines.